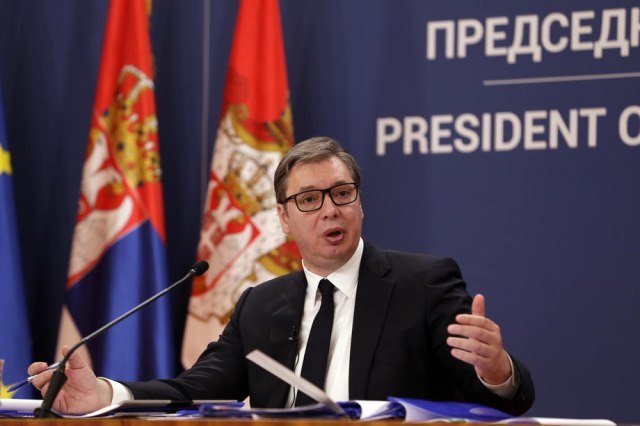 This policy of balance will be the backbone of the new Serbian government, the formation of which will follow in the coming months, although especially from the western centers of power come covert but also open blackmail that our investments and access to money and European funds are endangered, but also to prepare for the potential attacks on Kosovo and Republika Srpska, if we do not turn our backs on Moscow.

Among the various advisers and mediators of our diplomacy, but also domestic politics, among the last ones was the U.S. Ambassador Christopher Hill, who publicly advised us that there is no place for balancing and that our road is strictly to the west. Thus, according to many, he dangerously stepped out of his diplomatic mandate and interfered in the internal affairs of Serbia, which is inadmissible.

His outright message arrived practically on the same day as the congratulations of the U.S. President Joseph Biden to the head of the Serbian state on the second mandate won in the elections. Biden did not fail to mention that Belgrade is expected to make an alliance in "support for Ukraine and condemn the brutal war that Russia itself chose."

President Vučić met with Ambassador Hill on Monday, and the focus of the talks was on energy diversification, Serbia's European integration, as well as current geopolitical issues and initiatives for regional connection.

"The conversation was good, correct and open, there were no surprises. I know what the Americans think, they know what I think, and that's it. We are looking at how to deepen our cooperation. It is not easy for Western countries today to explain the difference between attacks on Ukraine and Kosovo's illegal independence, so the pressure will increase to show that this is not the case, and of course the request for membership in the Council of Europe is pressure on us, but we will continue to do everything in our power to defend our territorial integrity. I am always ready to talk and compromise, but I will not agree to blows to the head and insane demands", Vucic said after meeting with Hill.

Serbian President also told everyone in the world to come to their senses, because "the time of brutal pressures may not have completely passed, but their results have never been good."

"When it comes to the 'Kosovo army', it must not exist under UN Security Council Resolution 1244. But they care about international law. They pose a threat to Serbs in Kosovo and Metohija. But to the Serbian state as a whole, they do not pose any threat" , the president pointed out.

In a conversation with the U.S. Ambassador, Vučić pointed out Serbia's efforts aimed at preserving peace and stability in the region, as well as that our country is the initiator of numerous projects that connect the countries of the Western Balkans in the best way. Ambassador Hill reiterated the US support for the European integration of Serbia and the countries of the region, as well as the US position that the EU should expand.

Former Foreign Minister Vladislav Jovanovic said that "Hill is a man who firmly adheres to the positions he needs to realize, has a long experience in the Balkans, because he was involved in the events in Kosovo and Metohija and Macedonia."

"They are not choosing the means and the goal is to take control of the Balkans. Almost for the first time since the Brezhnev doctrine - who is not with us, is against us - this principle has been reactivated in Washington. The United States is pressuring everyone to force states to do something, even against our own interests. It is not the right way to establish better relations with the United States by arousing suspicion of other countries or gossiping about other countries. The trend is to make us quarrel with Russia and China at all costs," Jovanovic explained.

He pointed out that we constantly, before, but also now, insist on the sovereignty of Serbia and that we should continue to do so: "We have had cases in the past when we opposed Russia when they tried to interfere, but also other countries. It is very important that we never decided to be a member of a military alliance in peace, but only in war."

Retired Ambassador Branko Brankovic says for "Novosti" that Hill's statements are unacceptable in diplomacy, because they are direct interference in the internal affairs of our country:

"Such outright messages sent by Hill are expected, because he was the right hand of Madeleine Albright. However, in my opinion, that is the result of the inability of the United States to do anything against Russia regarding Ukraine. They practically got a big "no" from the EU which has made it clear that it will not go to war with Russia at the expense of US interests in Europe", Jovanovic said.

Support for the Open Balkan initiative

Ambassador Hill said on Monday that Washington supports the "Open Balkans" initiative. When it comes to the dialogue between Belgrade and Pristina, he agreed with Vučić that all efforts should be focused on the dialogue under the auspices of the EU.

Referring to the letter that Biden sent to Vučić, Ambassador Hill reiterated his country's support for Serbia's efforts to diversify energy sources and energy efficiency, emphasizing that the United States will work to give Serbia access to energy projects that are being worked on.

On Monday, Prime Minister Ana Brnabic said that Serbia was facing an extremely important and difficult week, as talks between Aleksandar Vucic and Vladimir Putin on gas prices were expected. When asked what threats are coming in order to decide on the conflict in Ukraine, the Prime Minister answered that Serbia has not remained completely neutral in this situation, but has made a political choice in accordance with international law.

"We consider it very wrong to violate the territorial integrity of Ukraine, we did not agree only on sanctions, but politically we have clearly stated our position. Those who bombed Serbia in 1999 and recognized the so-called Kosovo in 2008 'broke' all the basic Principles of international law on the backs of Serbia, and today, when it comes to sanctions against Russia, they should have a little more understanding for our country. Or fight in the same way for full respect for the territorial integrity of Serbia," she said.