Michel and Vucic addressed the media; Vučić: Our goal is full membership in EU VIDEO 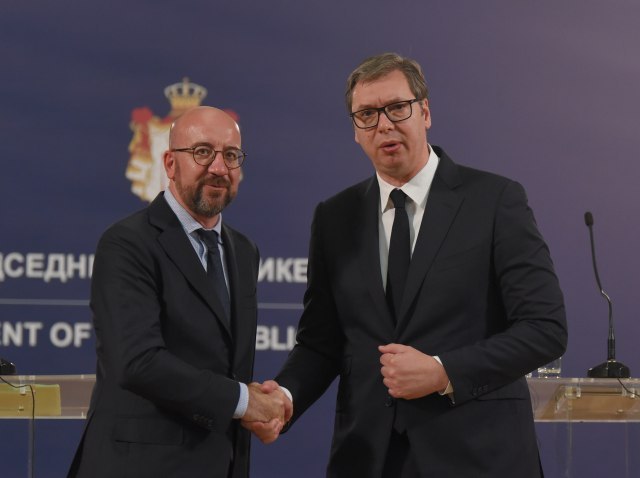 After the meeting, the two officials addressed the media.

President of Serbia, Aleksandar Vučić, stated that he was happy to host Michel and that it was very important for us.

"Charles Michel's visit is very important for our future at this moment. I am grateful to President Michel because he is always ready to hear the arguments of the Serbian side, and because he has always shown a desire for the Western Balkans to move faster towards the EU," he said.

Vučić said that during the meeting he pointed out that his goal is Serbia on the European path.

"It is not just an emotional question, but a question of reason. I will answer what everyone is running away from, and I am not at all ashamed to say how important cooperation with the EU is. 31 billion euros is the trade we had last year," Vucic said.

He pointed out that they talked about the region and about preserving peace and stability, but also about the dialogue between Belgrade and Pristina. "President Michel has shown us how to continue reforms. We are always committed and ready for dialogue," he said.

He stated that Michel told him that Serbia should work on the rule of law, and said that he understood all the words of concern that Charles Michel is facing.

"I believe that with the support of President Michel, we can achieve great and important things. We talked about energy and the market in Serbia, and we can expect EU support on that issue."

According to him, there was also talk of sanctions against Russia.

"President Michel showed an extremely strong desire and expectations of the EU for Serbia to join the sanctions against the Russian Federation, and I informed him of our political views."

In the end, Vučić thanked Michel for coming.

"We in Serbia respect everyone who comes to us, especially those who come with good intentions. Thank you for the respect you have shown for our country."

After the President of Serbia, Michel also addressed the media. He thanked for the welcome and congratulated Vučić on winning the election.

"We have the opportunity to exchange views today with you in Belgrade. This sends a strong signal for cooperation between Serbia and the EU. We just visited the science and technology park, and showed how much it means when Europe invests in research. We are actually investing in the Serbian people. The EU is the leading investor. Investments are over 30 million in the Balkans, in various sectors," Michel said.

He added that the connector through Bulgaria will diversify the supply of gas to our country. He also revealed when a meeting of 27 EU leaders with WB leaders will be held.

"In June, we will organize a meeting of 27 EU leaders with the leaders of the Western Balkans".