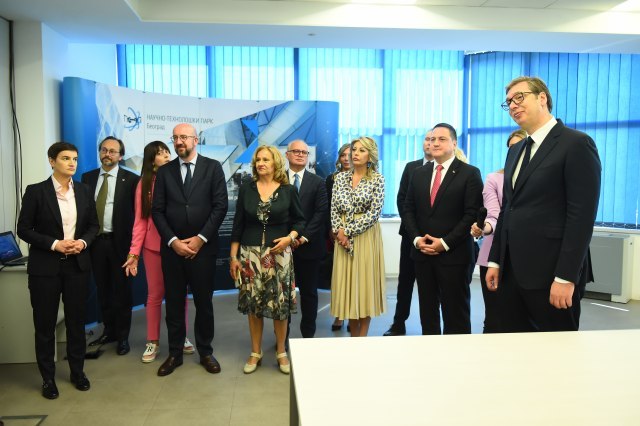 Vučić and Michel visited the Science and Technology Park: "Serbia is not only a partner, but also a friend of the EU", Michael said on that occasion.

Vučić and Michel visited the companies in the Science and Technology Park and signed an agreement on a joint project.

After the signing of the agreement, Prime Minister Ana Brnabić addressed the audience.

After the Prime Minister, Michel addressed the audience, followed by Vučić.

The process of joining the European Union is of fundamental importance for the common future of Serbia and the Union, European Council President Charles Michel said in Belgrade today, adding that Serbia has made a big step by opening additional chapters, which he said was a "sign of trust".

"I am convinced that today we will take steps in the right direction because we feel that there is something bigger than us," Michel said after visiting the Science and Technology Park.

Michel said that the common principles and values ​​on which the EU is based are freedom, rule of law and prosperity, but that today we are talking about security and stability.

"That is what is in question for us, and if we work together and go in the same direction, we will have the same common future," Michel said.

He emphasized that Serbia is not only a partner but also a friend of the EU and expressed satisfaction that he is in Serbia again and that he has the opportunity to visit the Science and Technology Park and Serbian companies which, as he pointed out, are part of the common future of the EU and Serbia.

"I am here not only to visit Serbian companies, but also because Serbian companies are part of our common future, and because of the opportunity to continue working together, accelerate the European integration process and guarantee a better future everywhere on the European continent," Michel said.

He added that there is a desire and personal will to take an important step in that direction, emphasizing that the accession process is of fundamental importance for the common future of the EU and Serbia.

At the beginning of his address, the President of Serbia, Aleksandar Vučić, pointed out: "We would not have had any chance to do all this without the support of the EU, not only financial support," said Vucic.

A meeting between Vučić and Michel is planned for 4 p.m. at the General Secretariat of the President of the Republic, followed by statements for the media by the two officials at 5 p.m.