Vučić at SNS ceremony: "To the biggest victory so far, a victory for our children"

Serbian Progressive Party marked 13 years of existence with a ceremonial academy in the Belgrade Arena. 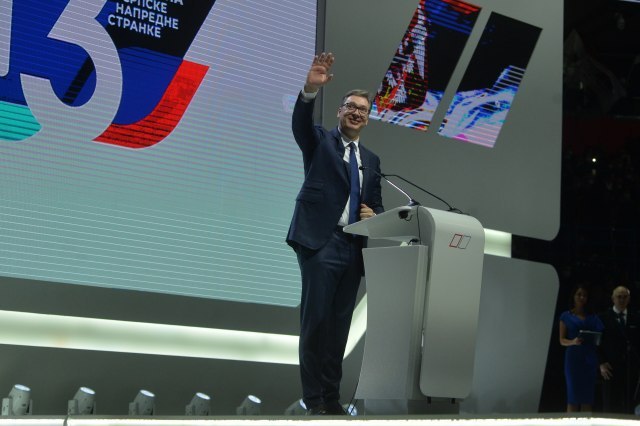 As a symbol of work, large infrastructure projects and investments, everything that has been done in Serbia since the SNS was the main pillar of the Serbian government, the Arena is adorned with the "Bagi Radiša" excavator.

Thousands of members and supporters of the party gathered in the Arena, from Subotica to Strpce, and many citizens stayed in front of the hall, so they watched the ceremony through video beams.

Upon entering the Arena, President Aleksandar Vučić was greeted with long-lasting applause and shouts of "Aco, the Serb", while a large banner with Vučić's face, flag and coat of arms of Serbia was spread on the stands.

Arena is also decorated with large banners "Kosovo and Metohija with our President Aleksandar Vučić", Skopje, Lebane, "Vojvodina is Serbia", "Vojvodina is with Vučić". The gathering is attended by SNS members, but also guests from other parties, SPS leader Ivica Dacic and Socialist official Dusan Bajatovic, president of the Union of Vojvodina Hungarians Istvan Pastor, and there are also representatives of the Serbian List from Kosovo and Metohija, Goran Rakic and Igor Simic.

The ceremony began with the performance of the anthem "God of Justice", and then a short film was followed by a reminder of all the challenges that Serbia faced during the coronavirus epidemic, as well as investments in health care.

"While the SNS is in power, this country will pursue an independent policy"

President Aleksandar Vučić thanked everyone who came, and especially those who did not manage to enter Arena.

"Ladies and gentlemen, dear friends, I want to apologize, because there are 25.000 people in front of the Arena, but there was no more room here." He said that today they showed what a decent Serbia looks like. "Those who wanted to ban others from freedom today did not know that Serbs are tough and stubborn and that they like it best when someone endangers their right to freedom. That is why you came here and showed everyone how much you love Serbia. Today you showed what a decent Serbia looks like. While you were coming peacefully, by bus, others behaved differently," said Vucic.

Vučić reminded that surrender is not an option, as well as that there is no withdrawal in front of anyone.

"I am proud to have seen some young people, eager to do a lot for their country. They came from different parts of our country”, he said.

He stated that we are currently building ten highways and expressways. "We have built more hospitals and health centers, renovated more than has been done in 50 years," said Vucic. President reminded that four scientific and technological centers have been built, in which young people work, who are pulling Serbia forward.

"And while some have closed museums and theaters, we are opening them. While some have owed premiums to our athletes for years, we are paying them immediately. And I say that because in these 13 years as a political party we have managed to change the consciousness of our people. Yes it is no longer valid for us to be placed last in every competition".

Vučić said that he is happy today because he expects success in all areas.

"When you look at cumulatively in 2020 and 2021, Serbia will be the country with the highest economic growth in the whole of Europe," said Vucic. He pointed out that in 2008 Serbia was altogether different country, but from the bottom.

"How things change quickly. That is why the nervousness of some, who are used to foreign embassies forming their opinion. And I am proud that as long as the SNS is in power, this country will pursue an independent policy, in the interest of the people and citizens of Serbia. And I can't describe to you how proud I am of that decision," he said.

"Serbia will not give up friendship with Russia and China"

President of Serbia said that no one can deceive people, and that people have eyes to see progress and improvement.

"I think it's very important today to show seriousness. Not to show hatred and passion." He stated that today he received thousands of messages from people asking him to let them deal with "these" that blocked roads. As he says, they are also our brothers and sisters, and we have to take care of them as well. "We are too small as a country to have the right to conflicts. Let others provoke conflicts, we will unite the people and all decent and normal people. That is the only future of this party and our country. And thank you for representing a decent Serbia," President of Serbia said.

President said that Serbia is on the European path, but that Serbia will not leave its friends.

"Serbia now has the lowest gas price in Europe, and it can count on support on the issue of Kosovo and Metohija. Serbia will not give up its friendship with Russia and China. And neither will they give up their friendship with us," Vucic said.

He said that Serbia is strengthening its army so that no one could humiliate us like in the 1990s and 2000s. "Those who think they are the strongest, they do not know that something will arrive in Serbia soon, and it will arrive much sooner than what they bought," said Aleksandar Vučić. He emphasized that "Storms", "Flashes" and pogroms will not be repeated, regardless of all pressures. "You can attack me as much as you want, but I will not allow to do that to Serbia. Serbia will show care for its people, even when everyone attacks it."

As he states, our sin is that we have faith in our people, and in our alphabet, but also in the fact that we are not ashamed that we are Serbs.

"We haven't threatened anyone. We did not and will never threaten anyone. We will not be ashamed of Serbs in Montenegro, and we will help all Serbs as much as we can," he stated.

"I will not run for SNS president again"

Vučić says that he wants everyone to consider Serbia as their country, all minorities living in our country.

"I believe that we will be exposed to numerous pressures, because we would like to be stronger," president said. As he says, we must be firm and strong, and keep what is ours. He added that he wants our strength to be our work, faith in the future and a bulldozer that pushes the country forward.

President reminded of the difficult situation he found in 2012, and that there was no money in the state treasury. Vučić said that he would not run for the presidency of the SNS at the next assembly of the party.

"But I will never leave this party, and I will fight with all of you in the upcoming elections, and I ask you to make it the greatest victory ever. There is no retreat before the worst, before those who would plunder our country. And so I want you to fight stronger than ever. And I tell you that I love you more than ever, and that I am proud of you. There are four months left, and that is why the greatest victory so far, a victory for Serbia, and for our children".

President of Serbia and the SNS, Aleksandar Vučić, addressed those gathered in front of the Arena.

At the beginning, he thanked everyone who came to the ceremony. "Thank you very much for being here with us tonight, for not finding it difficult to be in front of Arena. It is our duty to fight for our country and people, but also for every person in the country." He emphasized that many will do a lot to destroy Serbia, but that the SNS can win more convincingly with its work and sacrifice than before. "My heart is full when I see you, to say thank you again."

"I love you very much, these are the last elections in which I am leading you. But together we will pursue victory and secure the future for our children, who are the most important, as well as our Serbia," Vucic said.

He has repeatedly said that the SNS is the largest, most organized and most responsible political party and that change will be at "all levels". On October 21, officials of the ruling SNS marked 13 years of the party's existence by planting 13 maple seedlings in the Peace and Friendship Park in New Belgrade.

SNS was officially established on October 21, 2008.