Opposition and sympathizers of the opposition parties in Serbia blocked the highway in New Belgrade today, according to media reports, the traffic's unblocked. 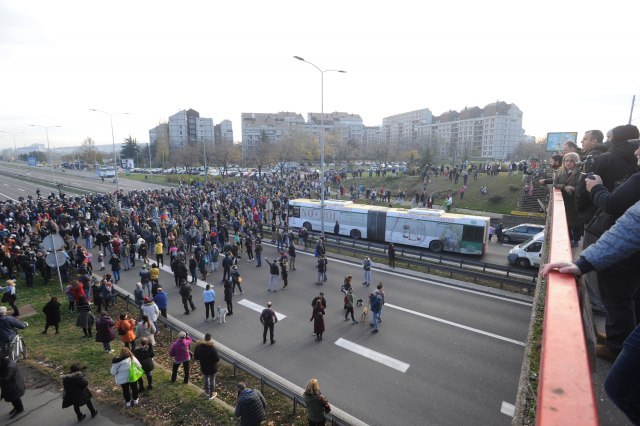 Several main streets in the city were blocked and without traffic, from Kneza Miloša, across Savska, to certain streets around them.

Large police forces are noticeable in all parts of the city.

The roadblock was organized despite the appeal of the Ministry of the Interior that blocking the roads is a violation of the law.

Let us remind you, on the occasion of the announcements on social networks that traffic blockades will be organized today in several places and highways in the Republic of Serbia, Ministry of Internal Affairs wants to inform the public that any traffic blockade is a violation of the law, as well as unregistered rallies.

Roadblocks in several cities in Serbia

The gendarmerie tried to break the blockade on the bridge, which connects Novi Sad with Petrovaradin across the Danube, but failed. In Kragujevac, too, protesters blocked a part of Kralja Aleksandar I Karadjordjevic Street, at the intersection near the Cathedral. Drivers are prevented from passing because they are located at the intersection. They later changed their location and, after the blockade of the city center, set out on the transit road to Kraljevo.

Members of the Police Administration of Kragujevac are present and for now everything is going without incident.

Citizens broke the blockade near Sabac

The citizens of Sabac are angry because of the siege of the roads in Sabac, which was organized by the opposition leaders Nebojsa Zelenovic and Dobrica Veselinovic, so the broke the blockade, reports "Novosti".

Several dozen citizens managed to literally push out the protesters, and many of them continued their journey to Belgrade, where they will attend the celebration of the 13th anniversary of the founding of the Serbian Progressive Party.

It should be reminded that in Belgrade and Novi Sad, the opposition and their sympathizers also blocked parts of the city.