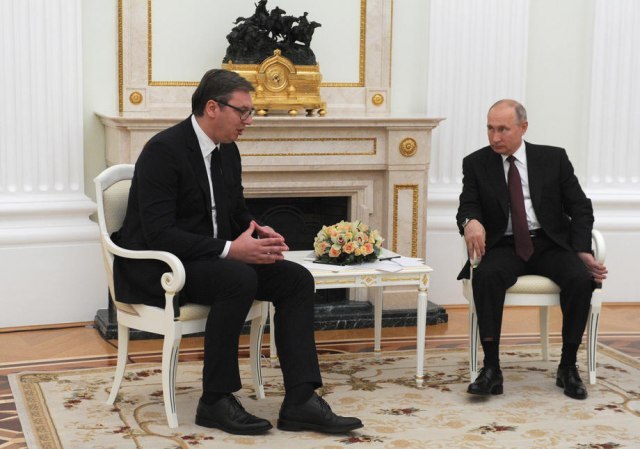 First, a tête-à-tête meeting of the two presidents is envisaged at around 1 p.m. local time, and then lunch is planned.

President Vučić emphasized several times that this is an extremely important meeting for Serbia, emphasizing as the most important topic of conversation the future long-term agreement with Russia on gas supply, not hiding the fact that he will ask Putin for the best price for that energy, because further economic development of Serbia depends on it.

"It is a question for our entire country, because the arrival of investors depends on it, whether we will have electricity and reserves," Vucic said before leaving for Russia.

The meeting in Sochi, the 19th official meeting of the two presidents, comes at a time of numerous challenges facing Serbia - increased pressure from the West "wrapped" in criticism of the rule of law, the media, the state of the environment, and the international community's silence on Pristina's moves, followed by a rather complex situation in the region.

Vučić himself announced that these are issues of key importance that he will discuss with the Russian President, whom, as he said, he will inform about everything that is happening in the negotiation process pertaining to Kosovo and Metohija, as well as about the overall situation in the Western Balkans.

"We are interested in the regional issues, but it is quite certain that I will be able to hear from Putin how he sees the situation in Europe and Asia and in the world, and how we, as a small country, can find the best position in a turbulent world and protect our interests" , said Vucic.

The Kremlin also sees these issues as central in the conversation between the two leaders. Yesterday, Kremlin spokesman Dmitry Peskov said that Putin would talk to Vučić in Sochi about "cooperation between the two countries for mutual benefit", which, as he assessed, would be "very important talks with Russia's ally and friend".

Vučić announced that after talks with Putin, he would be able to inform the Serbian public about all new agreements in the field of economy and in other areas.