Today, the President of Serbia, Aleksandar Vučić, addresses the public from the building of the Presidency of Serbia. 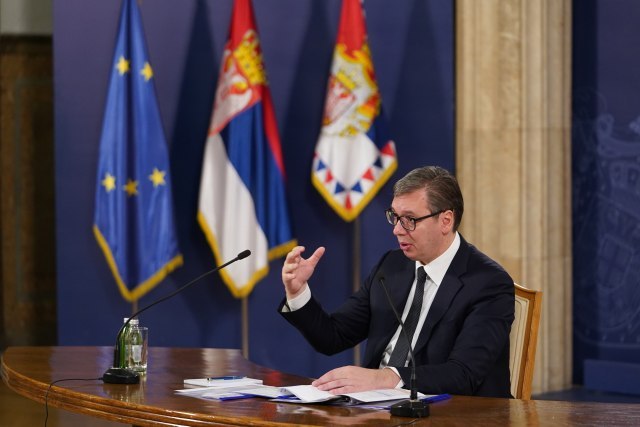 President talks about negotiations on Kosovo and Metohija, a visit to the Russian Federation, as well as other important economic and political issues.

Serbian President began his speech by talking about demographic measures.

"What we agreed with Minister Dmitrovic and the entire government, and having in mind the fact that we are disappearing as a nation, that there are fewer and fewer of us, the data show that we need 2.15 for reproduction," Vucic said in his address.

"It is a very complex problem. We have been thinking about it for decades. Regardless of the fact that the budget was adopted, from January 1, RSD 300.000 will be paid from the state for each firstborn. Everyone in Serbia will receive more than 4.000 euros. We want to encourage childbirth. As for the second and third child, there will be a significant increase especially for the second child... These measures will be drastically increased financially and in every other sense. Measures for the first-born child were prompt, especially for the poor. The measures for the second child will be known in about 15 days", Vucic stated.

"The amendment to the Law on the Family will specifically regulate the issue of students who want to fulfill their parental needs," said the President of Serbia. He stated that measures are being introduced in order to stimulate childbirth among students. If a woman becomes pregnant, the exam deadlines will not apply to her, nor to men. He pointed out that deadlines will be introduced for those students to finish the faculty by the age of 26, i.e. the Faculty of Medicine by the age of 28, and that they will be registered as if they had finished on time.

"Two measures of one-time assistance amounting to RSD 300.000 for students, we will do that in the next month," he explained. "Only for the measure for the first-born child, the increase is an additional amount of 5.7 billion dinars," the president stated.

As he pointed out, the most important measure concerns the role of the mother, so in order to prevent any abuse, those are apartments and aid that the state will give to married couples, where the right of ownership will go to the mother.

"By doing so, we want to motivate young people to leave their homes and parents\' apartments earlier, because they have such a small chance of starting a family. That will encourage housing construction, but also couples who want to become parents. That is EUR 20.000 of state-aid", Vucic pointed out.