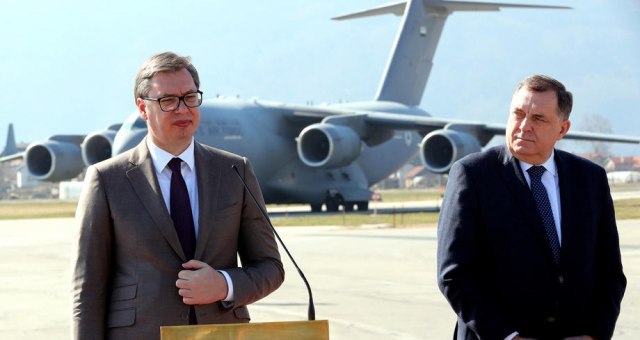 Speaking about the case of Edin Vranje, who was released from custody the day before yesterday, thanks to the President of Serbia, Aleksandar Vučić said that he could not comment on individual cases, but the initiative was to sit down and talk.

"There was an initiative for the prosecutor's offices of Serbia and Bosnia-Herzegovina to sit down and talk. There is something that burdens the relations between the two sides even 30 years after the war. I would say much more than someone would like to admit. And that is the fact that many Serbs do not know whether they are on some indictment in Bosnia-Herzegovina, and many Bosniaks do not know if they were on any of the criminal indictments here in Serbia. Our idea was, and I presented this to Serge Brammertz and everyone else, the following: "Come on, people, let's stop this once and for all! Let it be clear to both sides whose names are on the indictments and criminal charges and let us try to do that, that if in 26 years and, in some cases 30 years, we have not prosecuted some people, let us show trust in each other and leave it to Bosnia-Herzegovina's prosecution, and subsequently, of course, to Bosnia-Herzegovina's judicial authorities", Vucic said.

According to him, Serbia did it "without the intention of ever asking and blackmailing Sarajevo whether they will do the same."

"This was a unilateral act of our will, which I think is important and has brought greater trust to both Bosniaks and Croats from Bosnia-Herzegovina, who should be able to move freely throughout Europe, and, of course, to move freely within the region before that and to be able to come to Serbia peacefully and normally. I think that this is an important step forward and an important link in the chain of creating greater trust between us and that is why I was fully in favor of it. I do not regret for not seeking reciprocity as it is enough to show your good will, and I hope that it will cause good will on the other side as well. If it won't, I don't think it is particularly important. It is important that today we can invite everyone to visit and that every Bosniak from Serbia can invite his Bosniak friend, relative, to come to Serbia at any time", Vucic said.

When asked to comment on the latest statements of Milorad Dodik, the leader of the SNSD and a member of the Presidency of Bosnia-Herzegovina, who even brought an accordionist to the Presidency of Bosnia-Herzegovina, Vucic said that "he will not and does not want to speak against Milorad Dodik or want to interfere in internal relations of Republika Srpska".

"I can say, from the angle of regional stability, what I would like it to be. I had a very busy day on Monday, I would even lie to you if I said that I saw a lot of things. What is most important for Serbia, which is for me personally of utmost importance, that is that we try to talk constantly, instead of resorting to the policy of accusations against each others.

I listened and saw when it was announced that it is possible that, when we disclose all criminal charges, and here we are talking about 28 criminal charges, we are doing it in order to free Serbian criminals. It’s so pointless because we didn’t even ask for it. We asked if you wanted to do the same. If you want, all right, if you don’t want, then you don’t want to, that is fine with us, too. This just shows that, whatever you do, whatever good thing you do for the sake of establishing mutual trust, better understanding, if you want, after all, a simpler and better life for individuals in both BiH and Serbia, again you can't do it because media focus on the politicians perceiving them as bad. There is no thing I could do, or anyone else, without someone saying, sorry, it's good, it's worth it, for the sake of a better relations. It all speaks about how far we have gone in all this", said Aleksandar Vučić.

As for the situation within Bosnia-Herzegovina, Vučić says that Serbia, in accordance with the Dayton Agreement, has special ties with the Republika Srpska.

When asked if he was worried about the situation in Bosnia and Herzegovina, the President of Serbia told us:

"I spoke about it especially when we were in Slovenia, not so much at the Summit on the Western Balkans, but at a party meeting of the European People's Party. There when I listened to the differences and speeches of individuals, because I was one of the few who listened to all speakers from Bosnia-Herzegovina and all other parts of our region, I was very worried, because I saw completely different views, different content of the essential things that people who came from Bosnia-Herzegovina were talking about, but for us it is very important to keep the peace and for us it is very important to look at how to cooperate economically", he said.

When it comes to the "Open Balkans" initiative, which individuals in Bosnia-Herzegovina are still skeptical about, the President of Serbia says that he wonders why anyone, especially Bosniaks, would have anything against that idea.

"Today, we are working with Albania and North Macedonia on a project to completely erase borders for people crossing those borders in 2023. You have internationally established borders, that is, internationally recognized countries, both Bosnia-Herzegovina and Serbia, etc. But you are also making it easier. "Bosniaks who would always come to Bosnia-Herzegovina from Pazar, Sjenica, Tutin, or vice versa. You have a large number of Serbs who would go from Bijeljina, Banja Luka to Belgrade without borders, and vice versa. That would mean everything to our economies," Vucic underlined.

He claims that Serbia will have completely open borders with Albania and North Macedonia for trucks that will have unique work permits, which is important for the Balkan market.

"And why we don't have it with Bosnia and Herzegovina? I have to ask, apart from the fact that someone is talking nonsense mentioning a Greater Albania project for the purpose of attacking us in Serbia, and everywhere else, we are accused of a Greater Serbia project. I'm just asking you to ask them what bothers them in that project and what is Greater Serbia in that project Whatever we do, I don't know what to say, it will always be the matter of a Greater Serbia. Is that the only argument anyone has?", Vucic inquired.

"Thirty years after the war, people cannot understand that we have to connect economically and that our equalization of taxes, customs, incentives for the arrival of investors will bring much more to other countries in the region than to Serbia," Vucic pointed out. "I do not see the point of rejecting the "Open Balkans" initiative", he concluded. Vučić says that the "Open Balkans" is an opportunity for everyone to earn more. "I don't see the point of rejecting the 'Open Balkans.' I have not yet heard a single clear argument against that. They will say: we have the Berlin Process. And let them say. We have. The Berlin Process is fine. But this is more than the Berlin Process. This opens up even closer cooperation and wider opportunities, it establishes greater trust. And we do this ourselves. We decide for ourselves", Vucic said. "This will bring Sarajevo and Belgrade closer", Vucic concluded. Vučić says that Serbia will complete the highway to Požega next year.

"From there, we can work on the highway from Kotroman to Visegrad. From there, it is only 100 kilometers, 97-98 kilometers, depending on which direction you take to Sarajevo. We could achieve two great things. We will bring Sarajevo and Belgrade closer in less than three hours. But not only Sarajevo and Belgrade, because there are many Sarajevo residents who love Belgrade and many Belgraders who love Sarajevo. We will do one more thing. We will bring Novi Pazar and Sarajevo closer. Serbia will feel equally close to Belgrade and Sarajevo and there will be no problems. They will see that their state Serbia takes care of them. We have no problem with that. We just want to be connected and link our economies. If we start working, if we turn to the economy, then many other stories will become less important", concluded Aleksandar Vučić concluded.