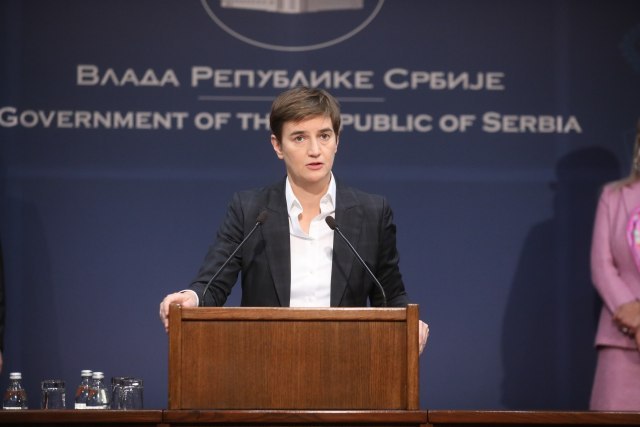 Prime Minister Ana Brnabic pointed out that it was especially important that the European Commission's Report noted progress in all political criteria and reforms in the rule of law.

At the press conference after the meeting in the Government of Serbia on the occasion of the EC Report, Brnabić said that the report is complex and covers all segments of our social, political life, foreign and regional policy.

"Personally, it seems to me that this is by far the best Progress Report for the last few years. There are still things we don't consider the same. I expected even more favorable assessments in some aspects, but we are pleased that progress has been noted in almost all areas," Serbian Prime Minister said.

Brnabić stated that in this report, the EC clearly emphasized that the Government of Serbia gave priority to reforms on the European path and especially to the rule of law, and that the introductory remarks stated that the focus of the Government of Serbia was on reforms. She thanked the EU Delegation to Serbia and the EC for stating that the opening criteria have been met and that it is necessary to open two clusters.

"The recommendation has never been clearer, now it is up to the member states and we are working individually with the member states to see if there is anything they perceive as questionable, to give all the information to get a green light from all members to open at least one cluster, if not both”, she said.

Prime Minister points out that the recommendation for opening two clusters is a strong political message to EU members, but also to our country and the citizens of Serbia, and that, as she says, a lot has been done in the area of the rule of law.

Brnabić adds that there is still a lot to be done. "There are a lot of things we have to work on, but for the first time, a clear direct message was sent that the Government of Serbia, the state, has made a significant step forward, especially in the area of rule of law," Brnabic said, together with the president and his team.

"According to the new methodology, political leadership is important and that is what we managed to do," she underlined.

When it comes specifically to the area of ​​the rule of law, Brnabić says that in connection with the elections, it was stated that the political parties continued the dialogue, and that the Government began to implement the recommendations of the OSCE Office for Democratic Institutions and Human Rights (ODIHR).

She also says that the report states that the application of emergency procedures has been reduced in the National Assembly, as well as that the code of MPs has been adopted.

Brnabić says that when it comes to cooperation with civil society organizations, the Report praised the formation of a new ministry - the Ministry of Human and Minority Rights, but also that the Government initiated a debate session.

Also, Prime Minister says that it is necessary to continue working on the dialogue with the organizations of civil societies. When it comes to the judiciary, the report states that the Venice Commission gave a positive opinion on the constitutional amendments.

"The report recognizes that the number of old cases in the field of justice has continued to decrease and that for the fifth year in a row, the judiciary is resolving more cases than it receives," Brnabić said.

"This is the first time we have mentioned the word progress in this area, it is a great and important thing for all of us, especially the Government of Serbia, it motivates us to continue," Prime Minister said and called on media associations to return to the working group and continue working together to improve media conditions.

Prime Minister also pointed out that progress in public administration had been noted, albeit limited, and pointed out that Serbia had received a very good report in the fields of economy, praise for sustainability and resilience during the coronavirus pandemic.

"The economy has shown sustainability and resilience, the labor market has seen a decline in unemployment rate, the structure of the economy has improved despite COVID, and public investment has continued to improve. The green agenda also noted good progress, especially in energy with a special focus on renewable energy", Prime Minister concluded and announced that the Government of Serbia will continue to work on reforms, as well as that the first meeting on that issue will be held on Thursday.