President of the Republic of Serbia, Aleksandar Vučić, talks about the fight against crime, tensions in Kosovo and Metohija, and other important topics. 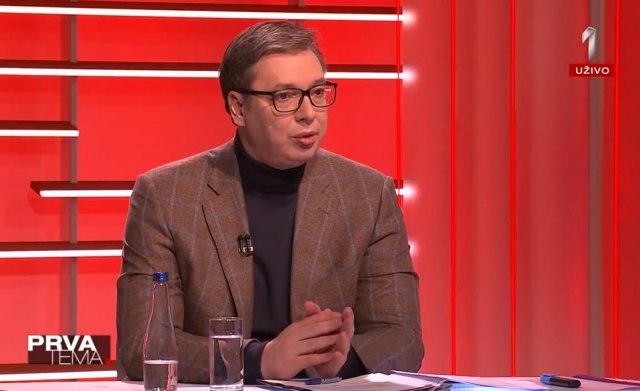 At the beginning of the interview, Vučić commented on the arrest of Dijana Hrkalović.

"This is evidence in the possession of the competent state authorities, related to the murder of Mr. Milosevic. After that, I assume that the DNA was changed, and that some people were released instead of being convicted. I assume that is one of the reasons," he said.

"We know who carried out the liquidation of Mr. Milosevic, I have already talked about that, but I would not like to put pressure on the competent authorities. In that case, the police have solid and unequivocal evidence," he said.

"What is important is that we have not had a mafia murder in Serbia for nine months," said Vucic. "I'm pleased with how we managed to cut off the head of the criminal octopus."

"Whatever is done, I am always guilty of something. They have been saying for months that I dare not arrest Dijana Hrkalović, I don't know why... As you can see, this country has its own mechanisms. Immediately after she was arrested, they changed are the story”, he said.

"There will be more arrests in the coming days... Both of the killers and their allies," Vucic announced.

No one will be protected

Regarding the murders of journalists, Vučić said - "The case of the murder of Ćuruvija is coming to an end, which was not done in the 12 years of the previous government... We will see that the murder of Mr. Pantić be resolved as well."

"It must be known that no one in the country can kill anyone, not pay for it. That is why the state exists. And the most important message, there are no protected people, no functions, no names and surnames, if you have committed crimes - you will be arrested, President of Serbia said. Someone from the police finally spoke about it, said the President of Serbia as a guest on TV Prva.

"We don't have any mafia killings since the end of February and those are big things. To eradicate it completely is impossible," he said.

"The state is determined to confront those who committed criminal acts and who participated in the commission of criminal acts, period," Vucic said.

Vucic commented on the incidents on the north of Kosovo

"They will soon produce another operation like this," he said.

"They will send police units to an Albanian place to say that it is the fight against corruption and crime," Vucic announced.

Members of ROSU came fully armed to arrest "Fanta" and "Coca-Cola" cans. What did they do? Remember that train? They never saw it. We committed a terrible crime because we sent a train," he said.

"You have no right to have an army, you breach Resolution 1244. They are openly lying to me. They are lying to all of us, they think we are stupid. They think we are all stupid and they can sell us that story involving the fight against corruption and crime," he said.

He said that everything is always done in Kosovo and Metohija with the support of Quint states, consisting of five Western powers: the United States and the Big Four (France, Germany, Italy and the United Kingdom).