We won't allow it PHOTO

We're committed to preserving peace and respecting Brussels Agreement but we won't allow the humiliation of either Serbia or its citizens, Aleksandar Vučić said 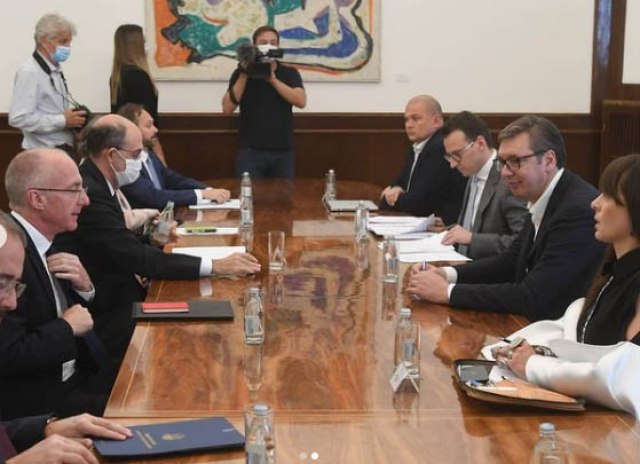 Vučić received the ambassadors of the United States of America, Great Britain, France, Italy and Germany, as well as the head of the European Union Delegation, who requested the de-escalation of the crisis in the north of Kosovo and Metohija, Office for Media relations of the President of the Republic of Serbia announced.

TV Prva reporter stated on the spot that the vehicles from the diplomats left after the meeting. These are the ambassadors of the United States of America, Great Britain, France, Italy and Germany, as well as the head of the Delegation of the European Union.

On this occasion, Vučić explained the position of Serbia to the ambassadors, it is stated in the announcement.

The meeting started at 1 p.m. on Andrićev venac, and the ambassadors of the United States of America, Italy, Germany, France and Great Britain arrived at the presidency building, accompanied by the head of the European Union delegation.

The topic of the meeting is the crisis in the north of Kosovo and Metohija. As previously announced, the public will have the opportunity to find out about the outcome of the meeting on the basis of an official announcement. It should be reminded that after the Serbs blocked the administrative crossings of Jarinje and Brnjak, dissatisfied that Pristina sent special ROSU units to those crossings due to the abolition of Serbian license plates, Quint's ambassadors offered the President of Serbia a proposal for resolving the situation.

Serbian President Aleksandar Vucic said he had turned down a Quint proposal for a compromise solution to the present situation in northern Kosovo and Metohija because he had had enough of a “fait accompli policy.”