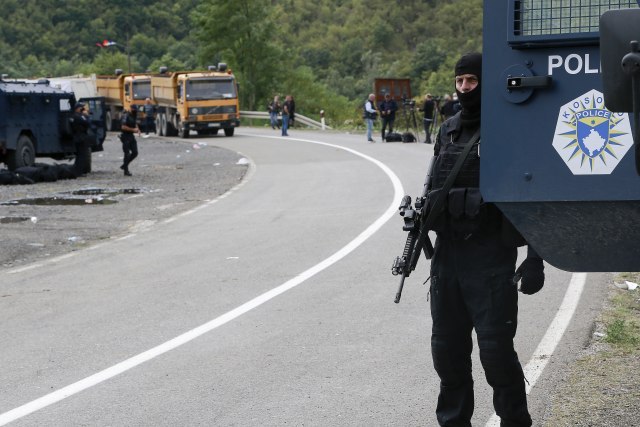 ROSU units are still present at these administrative crossings, and Serbs who are protesting are still not giving up. The situation is calm, and the local media state that an increasing number of Serbs are expressing dissatisfaction with the decision of the Pristina authorities.

As a reminder, Serbs are dissatisfied with the decision of the so-called Kosovo's government on the replacement of Serbian license plates with temporary Kosovo ones, under the five euros cost.

Tensions were additionally increased by the incident on Thursday, when ROSU units beat three Serbs near Brnjak, who did not participate in the protests, but, as it is stated, were preparing firewood for the winter season.

"Come and see for yourself if it's true"

President of the Serbian List, Goran Rakić, stated that, since allegations were heard that there were no attacks and that Serbs were not beaten on Brnjak, he called on Priština and international organizations to come and make sure that it was true. Rakic stated that the gathered people are asking for only one thing - freedom of movement, what belongs to them according to European rights, which is why he asked Pristina, and above all the international community, to get involved and schedule a dialogue as soon as possible, because, as he said, when dialogue is not an option, we have conflicts, Kosovo online reported.

"We are arriving from Jarinje, where the situation is relatively calmer and more stable than here. I received information that members of ROSU special units beat three Serbs here who were just trying to earn a piece of bread and feed their family," Rakic said, stating that they are currently in hospital in Kosovska Mitrovica and he will go to visit them.

"Kurti's goal is to break the Serb resistance"

Editor of the Kosovo online portal, Miloš Gajić, says for RTS that we are used to the EU and the international community reacting late, and when they do, they do it in a so weak form that is inadequate to the situation on the ground.

"It is often a manifestation of open aggression, disrespect for the rights of Serbs and endangering Serbs, and it has been shown in full display again. Pristina authorities are allowed to appear in the north of Kosovo with such open aggression, with the aim of breaking the resistance of Serbs, to show that they have full command in Serbian communities", states Gajić.