President of Serbia, Aleksandar Vučić, referred to the withdrawal of the Draft Law on Internal Affairs. 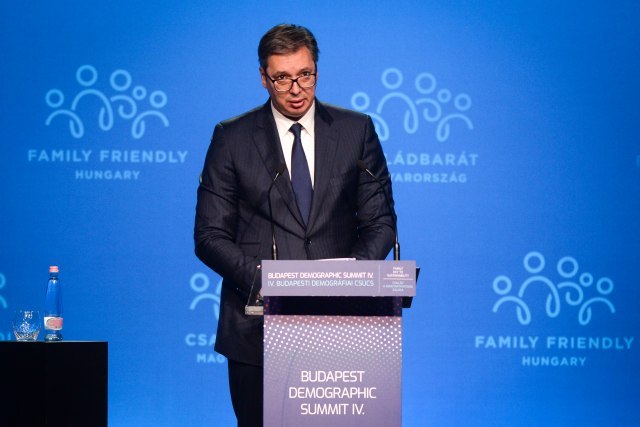 "I am guilty that the draft law is being withdrawn from the procedure, I apologized to Aleksandar (Vulin). I did that because there are six months left until the elections and I do not want us to pass such laws in that period," Vucic told reporters in Budapest, and commented on how part of the opposition calls for violence.

"All together, they can't collect 10 percent, and the law has been in a procedure... I didn't look at the law, not a single word. We\'ll see what the law will be in the future. Do I trust Vulin more than the liars that would do anything to smear their own country? I trust Vulin," he said.

"They desperately cling to that in order to deceive the public... They were not capable to arrest Saric", President of Serbia points out.

In politics, the president said, you cannot make decisions of your own liking, but which are good for governing the country.

Asked to comment on the opposition's accusations of making the moves made by Milosevic and that this crisis cannot be resolved politically, Vucic said that if he understood well, the opposition accused him of withdrawing the law in order to "beat them up" and prevent them from coming to power", and that now that he has withdrawn it, they also accuses him for the same reason, of preventing them from coming to power.

"And all that in one day, today... Genial, indeed... They have no principles, to win you have to have a plan and a program, people have to trust you...", said Vučić.

He reiterated that it was only a draft law on the police, and that the opposition was desperately trying to cling on something so that they could lie to the people. "When did they arrest them? Why didn't they arrest the killers from Buha to Gavrilovic? Well, they didn't, what do they care, they never arrested anyone," the president said.

"And they should lecture us...", President concluded.