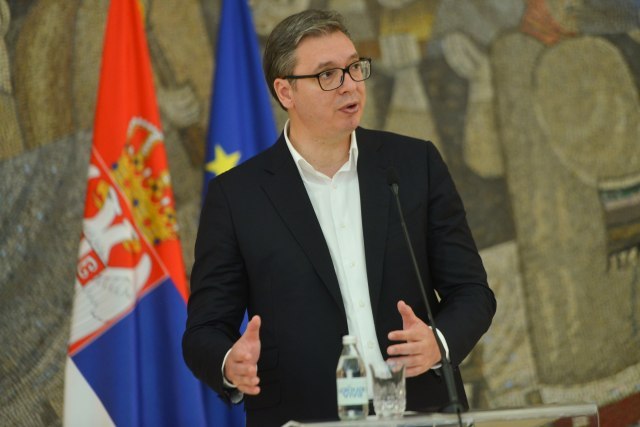 Addressing the public, President of Serbia, Aleksandar Vučić, who chaired that session, said that he received a proposal for resolving the situation at Jarinje and Brnjak crossings yesterday, but that he rejected that proposal, for which he received the consent of the National Security Council.

At the beginning of his address to the public, he said that the situation in the Serbian Army, as well as in the Ministry of Internal Affairs, armament of the army, as well as the police, which had been discussed before, was analyzed at today's session.

Vučić also said that they discussed the situation in Kosovo and Metohija "especially after the criminal action of Priština and the sixth intrusion in the Kosovo north, with armoured cars, long rifles and the mistreatment of the local population without prior notice to the mayors of four municipalities with a Serb majority.“

"We have reached conclusions, Serbia will continue to insist on preserving peace and full security for Serbs in Kosovo and Metohija. Statements in which they equate us and say that both countries are guilty are inappropriate," he said.

„The only solution is the withdrawal, and then talks in Brussels to reach an agreement of possible,“ Vucic reiterated.

He also pointed out that yesterday he received a proposal from the EU and the Quint countries on what a "supposedly compromise solution" should look like.

He added he rejected the European Union suggestion about how a compromise should look like. That suggestion, according to him, meant Kosovo should give up 70 percent of what it intended to do at „the administrative line“ but introduce 20 to 30 percent of new measures.

„I rejected that because I’m fed up with the fait accompli policy. You cannot talk to Serbia in that way,“ Vucic explained. If, as he explained, we had agreed to that proposal, the ROSU units would have been withdrawn.

"But we did not accept. We are asking them to withdraw unconditionally," said Vučić, adding: "They would take it as a golden mean, as a bit of support for us, but they (Albanians) would do what they want. Ah, and... It's simply not possible", Vucic concluded.

He also praised EU for the offered proposals, because it is up to them to offer, and it is up to us to accept or reject. "I chose to say no, although it is easier for me to say yes," said Vucic.

When asked what we will do now, his answer is: "Nothing. How will it be resolved? It will be resolved somehow, only without humiliating proposals for Serbia. We will look to preserve peace. Because what will be next, breaking into Gazivode, so they will come and say let's compromise now. Well, I won't, and that's how it will be."

Asked to comment on the statement of the Deputy Prime Minister of the so-called Kosovo's Besnik Bislimi, who said that Pristina will not establish the Community of Serbian Municipalities as long as it is considered harmful to the institutions and territorial integrity of Kosovo, Vucic said that Beslimi is a key man alongside Kurti.

"Otherwise, there is nothing to believe in his words, but if he talks about the intention against Serbia, there is something to believe, as he has so much hatred against Serbs and Serbia," he said, adding: "I'm just waiting to hear that from the EU, because they are the guarantors of the Brussels agreement. And we sent that question to the EU, because why should we come to Brussels if you can't guarantee and if that agreement cannot be implemented."

Here we come, as the President of Serbia says, to the essence of what he talked about yesterday with the representatives of the EU, and today with the members of the Quint countries, but also the EU again, asking the question - what did Serbia do bad yesterday?

At the session, as the president said yesterday, the current situation will be considered and the measures that Serbia would take, both economic and political, will be agreed upon.

He also called on the international community to reason with Pristina so that Serbia would not have to implement any measures. Vučić told Serbs from Kosovo and Metohija, especially those in the north of the southern province, not to fall prey to Pristina's provocations.

"Great greetings to the Serbian heroes who endured the terror of the Albanian special forces all day and all night. These people are the pride of Serbia and our nation," said Vucic.

He told Albanians and the international community that Serbia is committed to peace, but that it will know how to protect its country.

The sessions were attended by Ministers Nebojsa Stefanovic, Aleksandar Vulin, as well as the Chief of the General Staff of the Serbian Army Milan Mojsilovic and the Director of BIA (Security Information Agency), Bratislav Gasic ....