Vučić: "I hope we will not have to take countermeasures, as that won't be good" VIDEO

President of Serbia, Aleksandar Vučić, addressed the public from the Palace of Serbia. 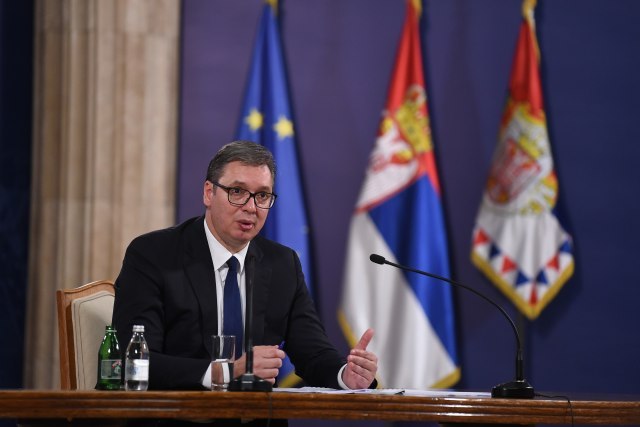 At the beginning of his address, Vučić said that this is one of the most difficult days for our people in Kosovo and Metohija.

"Albanians also hired snipers who covered the houses of young Serbs who could oppose their illegal actions," the president said.

"Last night, we knew what Pristina was planning. Today, after six o'clock, those forces moved to the north of Kosovo and Metohija. This is the sixth incursion, but the most brutal so far," said President Aleksandar Vucic.

Vučić reminded that Priština is not fulfilling its obligations from the agreement with Belgrade.

"We had two agreements, from 2011 and 2016. These are four agreements on freedom of movement. The essence is that these are so-called KS tables, which extended the validity from 2011 to 2016 and then until 2021. The basic obligation of Pristina was the formation of CSMs", he reminded.

"This is an ambulance that was transporting the patient," Vucic showed the picture, and said that the vehicle was stopped, and that its license plates were removed.

"And those are the license plates of a sovereign state," the president said.

"Pristina said at the last dialogue that it would not talk about anything but the missing persons, and when the issue came up, they said that they would not talk while Veljko Odalovic was the head of the Commission. They asked us for 22 locations, we investigated 22. And they did not investigate 9 out of 10 that we were looking for", Vučić pointed out.

The President said that no one in the world is interested in the fact that the Community of Serbian Municipalities (CSMs) has not been formed.

"They are not interested, but Serbs must be silent. I will not be silent to anyone anymore, every day I will tell the people what they are doing and how they are violating all regulations," he said. When it comes to the political situation in Serbia, Vučić pointed out that the situation is such that it is not easy at all.

He also reminded of the case of Ivan Todosijevic from Zvecan, who was convicted because he told the truth about Racak, and did not have the majority of judges of Serbian nationality in the court panel, which was agreed.

"They want to shut everyone's mouth," said Vucic. He emphasized that he really cares at any time in the world for a Serbian host and father, who can now only think about whether to put up a "house for sale" sign. He said Albanians do not respect cadastre and property agreements.

"They are deleting tens of thousands of Serbs from the voter lists, because it suits them that way, no rule where Serbs are is as valid as in other parts." He also pointed out the fact that the false state refused to register the property of the Decani monastery on that monastery.

"You don't even know, the Pristina 'minister' was here the other day, doing his job. And when Petar Petković has to go, then he can't, they say he made bad statements, which His Majesty Kurti did not like." President pointed out that it was a shame that they were bringing armed forces against the ordinary Serbian people.

"If the danger to the lives and property of Serbs in Kosovo and Metohija continues, we will call on KFOR and NATO to react, but we will not allow a repeat of the pogrom of Serbs that happened in 2004. We want a compromise and we always talk about every issue," Vucic said.

Serbian President said that he is sick and tired of appeals to both sides, claiming that Pristina was taking unilateral steps.

The president said that the rate of hypocrisy towards Belgrade was unbearable, and asked the people not to fall prey to provocations.

Answering the questions of the journalists, Vučić pointed out that Serbia does not know who gave instructions to Priština to make today's move.

"Lajcak certainly did not initiate that. I am almost certain that they are not happy about this move by Pristina. We are defenders of the truth, and if we need to say something to the Western world, we will tell them, but as friends. All those who recognized Kosovo don't want Serbia in Kosovo".

"You know how much I call for the openness of all borders, administrative lines in the region, because I believe that the economies in the region should be connected," the president said.

"We have raised the issue of license plates countless times. I am present all the time on the technical level meetings, I have been here since 2012, there is no one who has been present in the dialogue for nine years. We warn EU representatives about this. The essence is that all this was extracted from the Brussels agreement, they extracted what they like, and what is the essence and the core they do not implement, and that is the establishment of CSMs".

"Serbs are not cowards. I am proud of our people."

Vucic said that he would meet with the ambassadors of the Quint countries at their request before he convenes a meeting of the Council for National Security on Tuesday.

Vucic said that the Council would discuss possible countermeasures that Serbia could take.

“I hope we will not be forced to impose our own countermeasures, as it won't be good”, he concluded.