EU position is clear: No future without Serbia and the Balkans: We can't make mistake

Participants in the Bled SF's EU enlargement panel agreed that it is difficult to talk about the future of Europe without the countries of the Western Balkans. 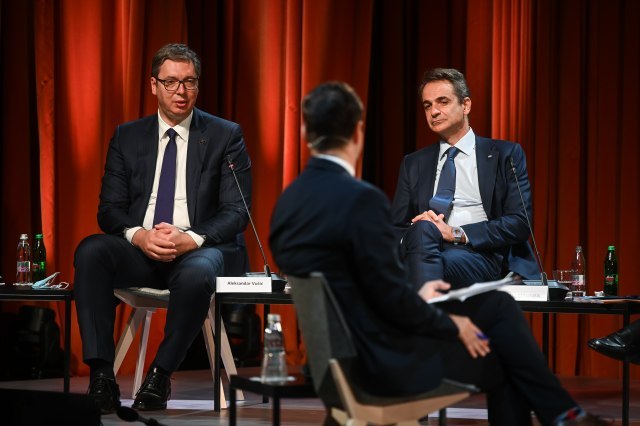 As it is stated, that is the strategic interest of both sides.

European Commissioner for Enlargement Oliver Várhelyi pointed out that the issue of enlargement is not only the geographical enlargement of the EU, but it is about ensuring political, economic and even security integration.

"The EU must not make a mistake in this case," Várhelyi said, adding that the countries of the Western Balkans must also believe that it is worth going through all the processes necessary for membership.

Slovenian President Borut Pahor called for the acceleration of the process and integration of the Western Balkans into the EU, while the Prime Minister of that country, Janez Jansa, emphasized that the issue of enlargement is a question of the future of Europe.

"The founders of the EU did not talk about Eastern and Western Europe, but about a free Europe. Their vision will be fulfilled only by the enlargement of the EU to the Western Balkans," Jansa said. Jansa added that this is a strategic issue, which is why Slovenia will do everything during its presidency of the EU Council to accelerate enlargement, and announced the holding of the EU-WB summit in Slovenia in early October.

Albanian Prime Minister Edi Rama stressed that the enlargement process must be accelerated and that, at the very least, negotiations begin with Tirana and Skopje. "Albania and North Macedonia are not asking for permission to be Europeans, we are Europeans. There is no future for Europe without the Western Balkans within the EU," Rama said.

Polish Prime Minister Mateusz Morawiecki supported the enlargement of the EU to the WB, emphasizing that it is a strategic interest of the Union.

"It is necessary to accept the family from the Western Balkans, and not to talk about further relatives - Turkey, Russia and China, which are expanding their interests in that region," he said.

Macedonian Prime Minister Zoran Zaev followed up on the words of his Polish counterpart, stating that the EU is a family that WB aspires to join, but that the EU is still not ready. High Representative of the international community in Bosnia-Herzegovina, Christian Schmidt, agreed with Rama and pointed out that the fact that negotiations with Tirana and Skopje have not started is a failure of the EU. On that occasion, he quoted President of Serbia, Aleksandar Vučić, who spoke at the first panel, and who said that people in the region are losing trust in the EU.

The Chairman of the Presidency of Bosnia-Herzegovina, Zeljko Komsic, said that no one in Bosnia-Herzegovina will be less Bosniak, less Serb, less Croat if they abandon the principle of constituent and turn to European values.

BiH Presidency Member Sefik Dzaferovic pointed out that the BiH population overwhelmingly wants Bosnia-Herzegovina to join EU. "Mr. Charles Michel (President of the Council of the European Union) talks about the EU from the economic aspect and the aspect of respect for human rights and freedoms. My country needs that as well. That is what all BiH citizens want. Bosnia-Herzegovina has all the reasons to join the EU, just like other countries", stated Džaferović.

President of Bulgaria, Rumen Radev, said that the procedures, that is, the reforms, are very important.

"We support enlargement, but we would like to see stable processes and be sure that our young people are free, without prejudice, hate speech and with knowledge about each other. When the WB fell off the EU radar, Bulgaria redirected the focus on it. Bulgaria always supports our brothers in North Macedonia in various crises and we are open to a dialogue that is crucial," Radev concluded.