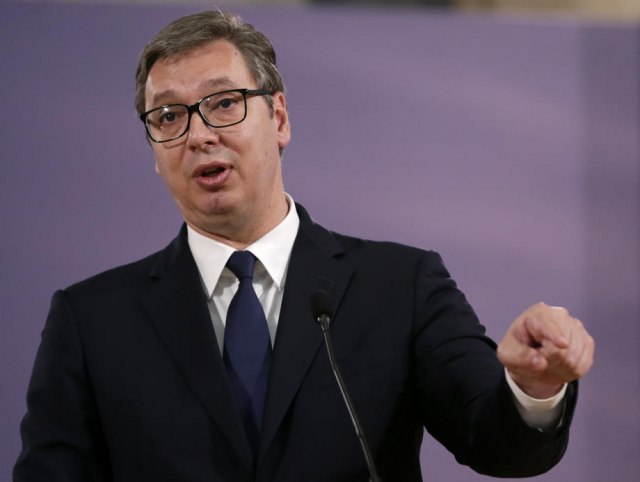 During the show, disturbing footage of the murder of Vlastimir Milosevic in March 27th Street in Belgrade at 6.50 a.m. was shown.

"This is a conflict between two clans, something that was imported to Serbia from Montenegro, this is a war between the Kavac and Skaljari clans," said Vucic.

The Kavač and Škaljari clans both originate from Kotor, on Montenegro’s picturesque Adriatic coast. They were once part of the same gang smuggling drugs from South America into Europe, but split in 2014 after a cocaine deal in Spain went bad, creating a violent rift that has deepened ever since. Most significant organized criminal groups have decided to join one of these two rival criminal groups.

"There is a business and economic-political background. This event is important because it is a big problem for us. I brought a complete records of the murders, the worst things happened back in 2001, 2002, 2006, and since then in 2018, but also in 2020. Why is it important for us? We have to make things right... I cannot come to terms with the reality because no one has the right to kill anyone, even when it comes to criminals," Vucic said.

Vučić reminded that Veljko Belivuk and Marko MIljković were suspected of that murder, they were arrested, but even after that they were released. He also recalled that behind everything is the drug trade and the struggle for supremacy in criminal circles.

Vučić said that Miljković once boasted that he had killed two of his godparents. Vučić explained that the karate master Milošević was killed only because he prevented Velja Nevolja from occupying the night clubs on the water.

"He was on their way of bringing drugs on the night clubs. He beat some of them because he was physically stronger. By the way, he was Marko Miljković's godfather, who even boasted that he was king because he killed two of his godparents," said Vučić. President explained that Belivuk and Miljković were arrested on the basis of biological traces and that they were arrested by Inspector Dejan Jović.

His illegal wiretapping began when he asked how it was possible that the evidence was destroyed.

Radoje Zvicer is the one who provides support to Veljko Belivuk, Vučić explained.

"They wiretapped me and my family"

He said that the state would deal with people from state structures who helped and cooperated with the mafia. "The investigation is ongoing and that will not change and no one can stop it. I am ready to bring a polygraph and answer," said Vucic.

"No one can play games with the state"

"What you see from the footage they recorded, the way they behave, they're trained for it, and that requires professional training, it's not criminal training. It was done for them by people who were in the system. Some of those people were arrested, some will be arrested. But everyone is weakened, that is good news. There is no more game with the state," said Vucic.

Additional photograph of the evidence is shown

Yet another photograph of evidence of brutal killings attributed to the Belivuk clan was shown.

Vučić emphasized that this is the last photo that will be shown, and that it concerns this investigation. As he says, he insisted that it be so because he does not want to disturb people. Part of the clan led by Vusevic fled Serbia, and was arrested in the Dominican Republic, he said.

"We sent our arrest warrant to Interpol for him at 14.15, but we were informed that one foreign service would press the Dominican to release him, and that happened at 18.15", Vucic said.

Vučić said that he did not want data to appear in the show that would jeopardize the investigation.

A video was shown in which Vuletić jokes about kebabs in one show and states that they are kababs from Goksi.

"They have this idea that they blame everything on me, in order to build a political opportunity to destroy stability in Serbia, in order for Serbia to return to a time of decline," Vucic said.

"It's not naive. It's a very wide network," he underlined. Vučić said that he himself wondered why he was always to blame, even though he gave money to Partizan as well, 2.5 million euros, to play in Europe, as it was given to Red Star. But we have made a better system, and since the last round there has been no set-up. No one can say that there are match-fixing. We have started to clean up the football mafia, but it takes time," he added.

"We will cut off the head of the drug mafia"

Vučić claims that Serbia cannot return to the past and that criminals must be smaller than a poppy seed.

"Today, criminals are not stronger than the state, they'd cringe like a dog. They can kill me and yet nothing will change. We are not going back to the old way. There is no going back, we will destroy the drug gang, cut off the mafia's head and create safe streets for our children", he said.

"While I am the president, Serbia will not be ruled by foreign factors," Vucic concluded.

Another photo of Belivuk and Lalic with a victim whose identity remained unknown was shown.

Vučić explained that the two of them were accomplices in the murder of the person in the photo, and that a third person committed the murder.

Photos of the victims were sent to their competitors and bosses

A photo of another victim who was brutally tortured was shown, and as Vučić said, the members of the criminal gang sent those photos to each other, as well as to the competing criminal groups and bosses in Montenegro.

He said that the activities of that criminal group lasted for about 6 months.

The attacks on me have only united those who support me

"I want to express gratitude to people for their support. When they started with these accusations, they united SNS like never before. Because, let me tell you, the SNS is made up of people who think differently, but such mafia provocations unite them and all honest people in Serbia. Thank you people for your support," Vucic said.

He said that he would see who would win, but that he was convinced that a decent Serbia would certainly win, because this country would not go backward.