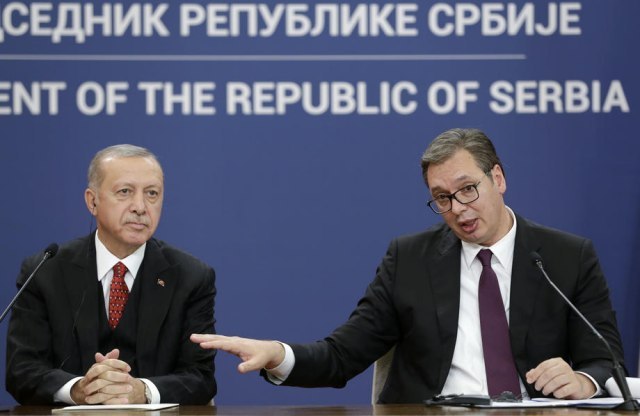 "Erdogan is a great politician, really, and Turkey is a great power... I will try to talk to him and the Greeks," said Aleksandar Vučić and reminded of the importance of the Washington agreement.

"If they start from September 1, until our agreement is valid, we have to defend ourselves," Vucic added.

"Turkey is a great powerful country, Erdogan is a great leader, I am small and negligible and Serbia is less important, but it is not so small that it would not try to oppose, because we are protecting our own. This is not Turkish and did not belong to Turkey, nor it will. We have to defend ourselves", Vucic said.

He added that he believes that Erdogan will mitigate his attitude, but if he does not, Serbia will fight. "We have no alternative. We will protect the people in Kosovo and Metohija, but you will also see that we are not so small," Vucic said.

About the statement of Bakir Izetbegović

"I am not in favor of silencing anyone. Bakir (Izetbegović) can do that. Vulin is my friend, I don't agree with him on some things. It was his party rally to which I was invited. He had a speech and it was not my duty to silence him", Vucic said during his visit to Despotovac.

"Serbia has its borders and they are recognized in the UN and we are only interested in them, including Kosovo and Metohija as part of Serbia in accordance with Resolution 1244. That's it. I will not apologize to anyone anymore, never again," he said.

"They are the ones who are talking about the abolition of Republic of Srpska. "Vulin was talking about something he thinks is right, you'll have to ask him about that… We are only interested in keeping our own," President of Serbia concluded.