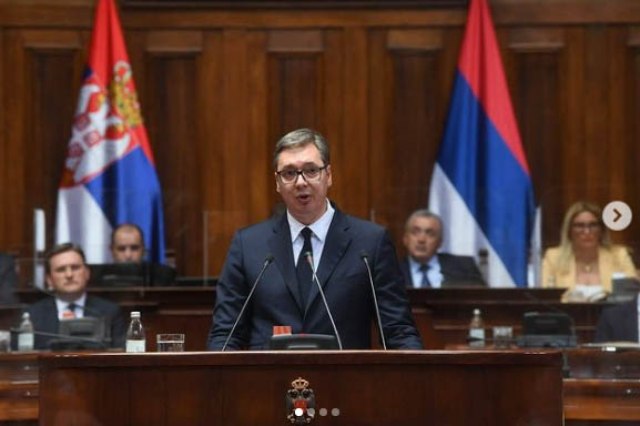 The President of Serbia said that today is not an easy task before us and that it is not the time for excessive expectations or expectations that are not in line with the reality around us.

"We will have to continue to address it responsibly with a strategic view of the future and awareness of how we want to leave the country to our descendants," he said.

The West will not change its mind

"It is a question that is in the subtext of almost every one of our political topics, every one of our state-building efforts, but much deeper in essence, identity, economic, and every other issue", he explained. Vučić pointed out that we used to have to postpone the issue of Kosovo, but we did not solve it. He pointed out that we are obliged towards the citizens of Serbia to solve this issue.

"That speaks enough about the weight that our people and our country are facing... We have done a lot to be proud of. On average, we have given about 500 million euros for our people a year," said our president, adding that the outflow was smaller, although the trend has continued for people to go to central Serbia for a better life.

He pointed out that the frozen conflict does not suit us, that is, that Serbs in Kosovo and Metohija are not up to it.

"They live incomparably harder and they want negotiations so that we can reach a compromise. If someone unfreezes the conflict, it is not a question of who has more weapons, who is stronger, but who has the right to return children in coffins," said President Vučić and stated that western countries will not change their position on Kosovo's independence.

Before the beginning of the session, the President of the Assembly, Ivica Dačić, determined that the majority is present in the Parliament, and that he also accepted the proposal for a debate regarding the report on the dialogue between Belgrade and Pristina by a majority.

Both reports were submitted by the Serbian Government, but they will be presented to the deputies and the public, as announced, by the President of Serbia.

The report states who has participated in the negotiations so far, what topics have been discussed and what has been implemented so far.

It was stated earlier that Pristina has not fulfilled its obligations, first of all it has not formed the Community of Serbian Municipalities, the issues of police and justice have not been fully resolved, there is no major progress on energy, telecommunications or cadastre, the number of official visits has decreased, there is no progress in the recognition of diplomas.

The report states that the improvements are made in the field of economic cooperation, freedom of movement and movement of people, goods and capital.