Vučić: I have heard such nonsense, we have to treat them like human beings VIDEO

Today, President Aleksandar Vučić met with the Commissioner of the European Union for Internal Affairs and Migration, Ylva Johansson. 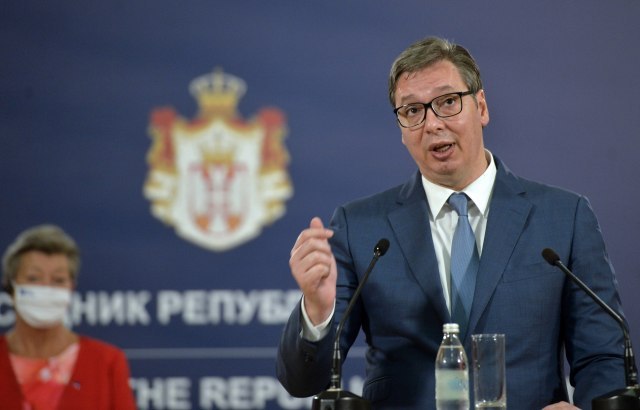 In the Presidency of Serbia, Serbian President and the European Commissioner discussed the Agreement on EU Support in Migration Management - the second phase for the improvement of reception capacities, protection services and access to education.

The agreement was signed in their presence by the Minister for European Integration Jadranka Joksimović, the Head of the EU Delegation to Serbia, Ambassador Sem Fabrizi, and the representative of the International Organization for Migration (IOM) in Serbia, Lidija Marković.

After the meeting, Vučić said that there were talks on many topics and pointed out that 11 million euros had been allocated to our country. Speaking about migrants, the President of Serbia pointed out that our country, thanks to the efforts of workers, managed to vaccinate all migrants.

"I am grateful that the money was given to Serbia," Vucic said after signing the agreement.

Vučić referred to the fight against organized crime, and pointed out that our country must do much more.

"When we will be rewarded, it is not up to us," Vucic said.

He said that our country has an obligation to take care of the displaced and pointed out that there are currently 3.977 people in reception centers, three times less than in some periods.

"We are ready to discuss all our obligations, in preventing illegal migrants, but also in a civilized way, by showing solidarity towards those who seek a better life. I have heard such nonsense... We must help these people and it is our obligation to treat them as human beings and to take care of them", President Vučić said.

"Let's show the hospitable face of Serbia," said the President of Serbia and thanked for the allocated money.

"I appreciate signing the contract"

Ylva Johansson said that she really appreciates that they signed the agreement, which is part of the wider EU support for Serbia.

"The EU has always been a partner to Serbia in solving migration challenges to Serbia from the start," said Ylva Johansson. She pointed out that people here were treated in a dignified manner. "We are now facing a pandemic of COVID-19 and I congratulate you on the way you are committed to the effort to vaccinate migrants," she added.

She congratulated Serbia for proving to be a reliable partner and stated that she had a fruitful conversation with Vučić and Minister of Foreign Affairs Nikola Selaković. During her address to the media, she referred to the conversations. "We have discussed certain topics and also the ones from my portfolio. Progress is needed in the area of ​​corruption and organized crime, the rule of law, the judiciary.

"You, President, also told me about the impressive progress of Serbia and the need to build a fast railway, and I will convey that to Brussels," she said.