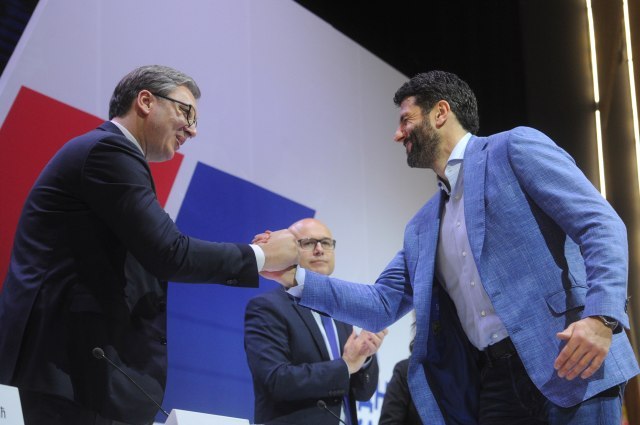 The session of the Main Board of the SNS began in the Kombank Hall in Belgrade with an address by the party leader, Aleksandar Vučić.

The second item on the agenda of the Main Board was the unification of the Serbian Progressive Party and SPAS.

President of Serbia and the SNS, Aleksandar Vučić, said that they had prepared a declaration which would be an important document in the work of that party.

"It is important for us to work on the unity of Serbia. To fight for a clear majority that will bring results. The result is a new paradigm of SNS policy. That is what we are leaving behind. That is why I wanted and participated in the negotiations with Mr. Sapic, because I wanted us not to constantly divide, but to show responsibility and to be able to unite. That our big family, our party brings people together. Our party must never be what some other political parties were", Vucic said.

He says that the SNS must take into account the interests of the people. "We have agreed on all the most important goals and I think it is important that the great events that await us, in the face of great pressures and the extraordinary results we achieve in the economy and health, that it is important for us to have new people and prepare for the party assembly. The party assembly will be held between October 21st and October 24. We will have more plenums, make important decisions, recommendations for the party's work on the ground and programs for the future until 2030," Vucic said.

Pursuant to Article 15 of the Statute, the Main Board decided that the members of SPAS should join the SNS in its entirety.

"I state that we unanimously accepted our friends from SPAS to our party" President Vučić pointed out.

Aleksandar Vučić also read the text of the declaration of unification of SNS and SPAS, which, as he said, will be one of the fundamental political documents of the Serbian Progressive Party for the future. Topics at the session of the Main Board are the unification of SNS and SPAS, as well as, as Aleksandar Vučić said earlier, plans, programs, but also problems within the party.

Earlier today, a member of the Main Board and SNS MP Vladimir Djukanovic said that Nebojsa Stefanovic resigned from the position of chairman of the board of the Serbian Progressive Party in Belgrade.