Vučić with the Swedish Minister of Foreign Affairs PHOTO

Today, President of Serbia, Aleksandar Vučić, met with the Minister of Foreign Affairs of Sweden, Ann Linde, who is also the OSCE Chairperson-in-Office 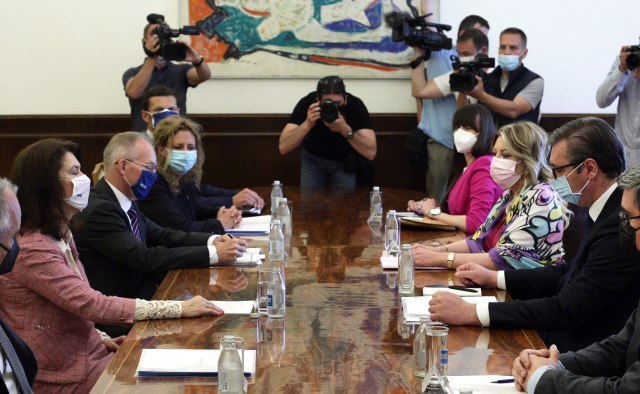 Vučić and Linde discussed priorities in cooperation with the OSCE, Serbia's European integration process, reforms in the field of rule of law, as well as strengthening bilateral and economic cooperation with Sweden.

As it was announced after the meeting, Vučić pointed out Serbia's exceptional cooperation with the OSCE and added that Serbia especially appreciates the Mission's support in the comprehensive reform process in Serbia, including expertise in program areas such as democratization and media, rule of law, strengthening human and minority rights and promotion of tolerance and non-discrimination.

Vučić and Minister Linde agreed that the role of the OSCE is very important for regional security and that Serbia, in accordance with the principles of that organization, is determined to make a full contribution to regional stability.

"Preserving stability in the region and orientation towards more intensive cooperation in all areas is of key interest for Serbia," Vucic pointed out, adding that work on further improvement of regional connections is a fundamental starting point of Serbia's foreign policy.

Speaking about Serbia's European path, Vucic expressed gratitude for Sweden's support, with a special emphasis on the readiness to share its experiences in the EU accession process. The President underlined that Serbia is ready to speed up the accession process and that is why it has accepted the new negotiation methodology. In the previous period, Serbia achieved remarkable results in the area of ​​rule of law, especially in the fight against corruption and the independence of the judiciary, but also in terms of gender equality, freedom of the media, domestic violence and all types of discrimination.

Vučić and Minister Linde especially pointed out the potentials in the field of intensifying economic relations, which includes an additional increase in trade, as well as a larger inflow of Swedish investments in Serbia.