"Let me say first: I apologize for the bombing"; "Nobody said that, thank you" VIDEO 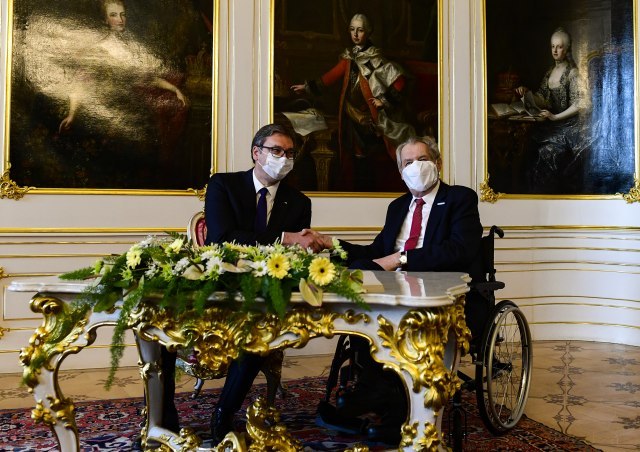 At the beginning, the Czech President Miloš Zeman addressed the media, saying that Serbia was a traditional friend of the Czech Republic, which had been betrayed throughout history.

"Serbia expressed its support for us, and we bombed it. Let me immediately say that I apologize for the bombing of the FRY. It was a mistake. As a man, I would ask the Serbian people to forgive us. It bothered me all the time", Zeman said.

As he explained, the Czech Republic was a young NATO member at a time and was looking for a way to prevent the NATO bombing, but it did not have support.

"We asked for consent and desperately looked for at least one country to be against the bombing, but we were left alone. It was still a lack of courage," Zeman said.

"There, I said it and I saved my soul, and now let me move on to what we talked about," Zeman said.

Zeman said that he talked with Vučić about the successful development of economic cooperation, as well as about the attitudes of the two countries regarding international relations, and he especially emphasized Serbia's ability to establish friendly or correct relations with all important countries.

Zeman also praised the rapid progress of vaccination in Serbia, which, as he said, is related to the fact that Serbia has acquired vaccines from several countries. "I highly appreciate this visit, and I gladly remember my visit to Belgrade, and I hope that I will take another look at that city just before the end of my term," Zeman said.

Due to his poor health, President Zeman was in a wheelchair, but he found the strength to get up and greet Vučić, expressing his respect and friendship.

After Zeman, the President of Serbia, Aleksandar Vučić, also addressed the media, thanking Zeman for his words of support and apology for the NATO bombing of the FRY.

"I know that it is not popular to talk about traditional and sincere friendship, but what I experienced today here in Prague and the hospitality that Serbia received here, and what you have prepared for us, it is something that touched me deeply," Vucic said at the beginning of his address.

"The words of President Zeman, a brave man with a unique character, who does not flatter anyone, mean a lot to me... I witnessed how much respected he is and I am a little envious, I want to thank him for these wonderful words he sent to Serbia. The Serbian people perceive the Czech people not as friendly, but as fraternal nation", he added.

"I am known for not flattering anyone, not only because I weigh 120 kilos, but also because I have a bad temper... We will be eternally grateful because what the Czech President said now is something that has never been said by anyone else and that gratitude will never stop," the President of Serbia, who also announced Zeman's visit to Serbia, pointed out.

"Zeman will visit Serbia before the end of the year, because he promised it. And I promised that Serbia would solve a complicated property problem and that we would give the Czech house from 1928 to the Czech Republic. And I expect him at the opening," Vucic said.

He added that members of the Czech minority live mostly in South Banat and represent the real wealth of Serbia, and that is why he wants them to be able to have their own house, which belonged to them and was confiscated in the 1960s.

Also, Vučić thanked Zeman for the order he awarded him. "For me, this means a great honor. First, I awarded him a medal, which he deserved many times, and what I wear today on the lapel of my jacket presents an additional commitment for me to fight for Serbian-Czech friendship, to work as much as possible. "And you have my promise for that," said Vucic.

He added that it is wonderful to be a Serb in Prague today, and that Serbia will never forget Zeman's words.