President of the Republic of Serbia, Aleksandar Vučić, talked today in Brussels with the NATO Secretary General, Jens Stoltenberg. 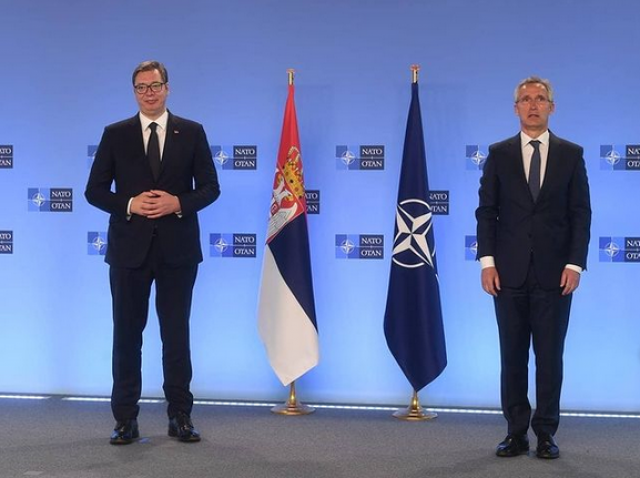 They discussed co-operation between the two sides and the KFOR mission in Kosovo and Metohija.

After the meeting at the joint press conference, Stoltenberg was the first to address the public, saying that the conversation with the President of Serbia was constructive.

He said NATO is committed to peace and stability in the Western Balkans, and has been making efforts in that area for decades.

The KFOR mission, he says, is the best proof of that commitment, because that mission provides a peaceful environment, freedom of movement for everyone in Kosovo, based on the mandate of the UN Security Council.

Stoltenberg emphasized that NATO respects the neutrality of Serbia. "We are facing common security challenges, and the partnership can bring benefits to the citizens of Serbia," he underlined.

He reminded that NATO is working with Serbia on the reform of national security structures, as well as that Serbia is working with NATO on the training of Iraqi military doctors.

After the meeting, the President of Serbia, Aleksandar Vučić, said that he could say that he was satisfied with the content of the meeting.

"I received a lot of assurances from Stoltenberg about security in the Western Balkans." "We had raised questions about certain speculations and we received a clear answer from the Secretary General. He emphasized the importance of KFOR. I think that will bring calm to the hearts of the people, not only in Kosovo and Metohija, but in the entire region," Vucic said.

Vučić said that Serbia would mark the 15th anniversary of the Partnership for Peace and invited Stoltenberg to come to Serbia, and said that he hoped to find enough time to visit Serbia at that time of year, which would be a good confirmation of good relations.

Aleksandar Vučić says that the dialogue between Belgrade and Priština was also on the agenda.

"Serbia is 100 percent committed to dialogue," Vucic said, emphasizing that Serbia will commit itself to a compromise solution.

Vučić emphasized the importance of peace and stability, and personally thanked Jens Stoltenberg for his readiness to discuss the problems that Serbia is facing.