President of Serbia, Aleksandar Vučić, revealed that Veljko Belivuk's group had been assisted by some embassies. 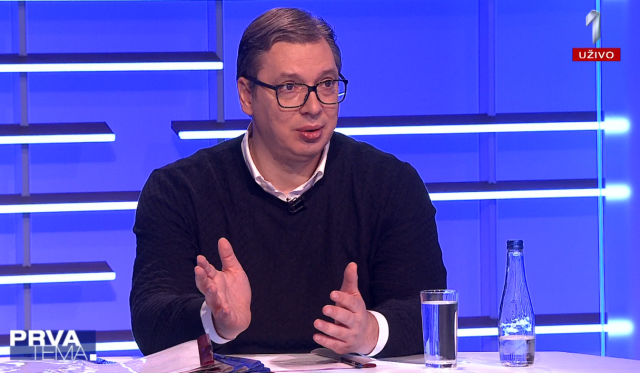 "They had a lot of apartments that served as their shelters, situated in the vicinity of certain embassies, which was unbelievable for me," Vucic announced.

"The prosecutor is very satisfied. He is dissatisfied with the content of the case, of course. But that story is over, case closed," he said.

He pointed out that many DNA traces were found on the spot.

"These people tortured, slaughtered and ground people in industrial meat grinders. It had nothing to do with football cheering but with drugs, politics, business and other things," he said. He also explained what was happening in Ritopek.

"One of those butchers sent Zvicer kebabs made of human flesh. Zvicer gets annoyed and says he wants kebabs and then they make them for him in an industrial meat grinder," he said. "I'm calling Zvicer to kill me, because he won't be free while I'm alive. You will have to answer for kebabs," he said.

As he pointed out, the defense's strategy at the moment is to say "you found the DNA, but we didn't do it."

Minister Vulin insists that the weapons in Ritopek were intended for Vučić.

"I do not rule out that possibility, although we have no evidence. We have indications that they said they needed additional 48 hours, so there was panic when the monument to Stefan Nemanja was opened. I don't want to wear body armor, I have a luxury not to wear it. I saw Vulin shaking with fear, and I went out to the podium dead-cold and gave a speech", says Vučić. As he says, the weapons found were from the Ministry of Interior's warehouse.

"Ministry of Internal Affairs did not do anything illegal, they sell weapons from time to time. It is our job to determine who gave those weapons to Belivuk's group."

There was a lot of talk in the media about the involvement of Nebojsa Stefanovic and Dijana Hrkalovic.

"Everyone involved in criminal activities will be arrested. I have nothing nice to say about Dijana Hrkalović, whereas I have a better opinion of Stefanović," he said.

The question of Stefanovic's stay in the SNS and the ministerial chair is also raised.

"It depends on him the most, we will talk about it in the coming days. Should I lead a chase and harangue against someone from my party? I wouldn't do that, for sure. I don't want to do something that was done to me," he said decisively.

"I'm not sure if I will run"; "Enough is enough - the main competitor"

President of Serbia stated that he still does not know whether he will run in the presidential elections next year.

"I'm not sure, we will make a decision. Personally, I will fight to have a genuine successor of this policy. I am not a godsend. Who knows what the criminals will do. I will not damage the party I lead or anyone else. We will see what the research shows," he said. According to current research, he says, SNS would win an absolute majority in the whole of Serbia.

"Currently, our main competitor is the Enough is Enough party, with some 4.5 percent. The results of other parties correspond to the image they had," he said.

He also spoke about the start of the inter-party dialogue in the presence of foreign mediators.

"It is a shame for me, as the president of Serbia, for someone from the outside to tell me what and how to do," he said.

About unification with SPAS and events in SNS

"Our goal is to have an absolute majority in Belgrade and a qualified majority at the level of Serbia. I think we deserved it. Everything but that would be a failure," he said.

A session of the SNS Main Board should be held soon.

"There will be a lot of changes. SNS is a wonderful party, of course there are bad people," he announced.

Disputable statements of the Israeli ambassador

He referred to the recent statements of the Israeli ambassador.

"The Israeli ambassador said that he did sign a paper under American pressure, and I didn't! I saved Kosovo and Metohija, I didn't sign any agreement that we would recognize Kosovo. He didn't say bad things, except that he said one thing incorrectly. The media took advantage of his statement, spinning it further", he said.

About the epidemiological situation

Asked when we will finally defeat epidemic, Vučić pointed out that we will be close to that when we cross 3.000.000 vaccinated.

"United Kingdom did not register any deaths three days ago. They succeeded, with a comprehensive vaccination," he said. He says that the announced financial incentive affected a larger number of vaccinations.

"Today, there were 20.000 vaccinated. The numbers are growing, whether because of some public figures going to vaccinate themselves publicly, or due to 3.000 dinars, it does not matter. That is what brings us better growth. Vaccination is essential for our country," Vucic believes.

President of Serbia stated that he was not angry during the meeting with Slovenian President Borut Pahur.

"I wasn't angry at all, I just told the truth. I don't care if they have anything to blame me for. They don't care if someone tells them that in their face. What can they do to me? To invest more money in my replacement? Tens, hundreds of millions of euros? They have until now invested billions against me," Vucic said.

"Whenever you hear someone say that he is against the change of borders, know that these are hardened fraudsters and people who want to destroy Serbia at any cost. Because those people have already changed the borders of Yugoslavia, then Serbia. They attacked Serbia, destroyed our villages and cities and killed our children", he added.

He also mentioned proposals for mutual recognition of Kosovo and Metohija, which he said he would not accept "at the cost of his life".

"I am proud of the fact that I am the president of Serbia who endured every pressure in Washington. I give my head, I do not give Serbia," Vucic pointed out.

He also spoke about the upcoming Brdo-Brioni Summit, where he will meet with leaders in the region, such as Milo Djukanovic and Zoran Milanovic.

"I will have to come nicely dressed. It just so happened that they were presidents, if they were prime ministers, it would be a little different. I will defend Serbia, I have to. I think I last saw Djukanovic in Jerusalem," he said, adding: "I have no reason to worry. I have not insulted any of them, and I have protected the interests of my people, and I will continue to do that," Vucic said, adding that they could adopt an agreement but without Serbia.

However, he doubts that some decisions will be made without Serbia.

"I have listened to this for nine years. I have gone through so much pressure that I would not wish on anyone. From Brussels to Washington," he said.

He stated that he would not give up cooperation with the countries from the east.

"Here, I will not give up Russia or China. What are you going to do now, kill me?" Vucic asked. He pointed out that the analyst who dealt with this topic received money from America.

"The point is something else. I know what happened and I know what's in store for me." He points out that a lot has been done for Serbia, he states that all factories were destroyed and looted before, now we are the country with the highest growth in Europe.

"You also have agents from the east, not only from the west, who are working against our country," he said.

Withdrawal of KFOR and UNMIK troops from Kosovo and Metohija.

As for the withdrawal of KFOR and UNMIK troops, he points out that neither of the two options is good.

"You have two options, to withdraw KFOR and UMNIK and to keep Bondsteel as an American base or not to remain, and these to withdraw. That would mean that the Albanian army would occupy the borders with Serbia. Ours is to preserve peace and stability, boosting further economic growth that we made. That our wives and mothers do not worry if their children will return in coffins", he said clearly.

He pointed out that Serbia is now five times stronger than in 2008, when the so-called Kosovo declared independence.