Vučić: I'll be even more arrogant and rude because you humiliated Serbia VIDEO/PHOTO

President of Serbia, Aleksandar Vučić, addressed the ceremonial academy on the occasion of the Victory Day over Fascism. 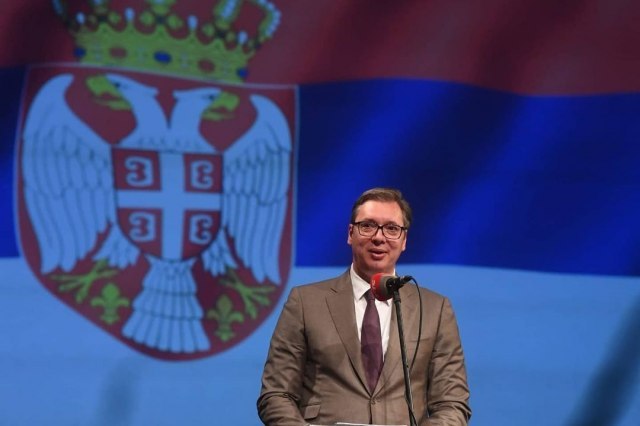 He began his address with the verses of "Bloody Fairy Tale".

"It is difficult to speak on this day. Fewer countries have ever essentially marked the Day of Victory over Fascism. It is our job not to hide the truth, not to allow lies to win," he said.

He pointed out that the change of history is most present in our region.

"Terror was carried out primarily against the Serbian people. It is impossible to count all the places of suffering. What is a man who kills another man? Is he killing an entire nation?" The president asked in his speech. He added that innocent victims are holy, and that for Serbia, Victory Day is not only the end of the Second World War, but the end of suffering. "Serbs had to pay a high price. Whoever thinks that Serbs rushed into the war against Hitler - he does not know Serbs. Our capital will say no to any future Hitler. Serbs have taken up arms everywhere in Yugoslavia," the president emphasized in his address.

No other nation has said "no" as loudly as Serbia said in the 1940s, Vucic was clear.

"We must not and will not forget. With that, we will forget the students from Kragujevac and Stojanka's three sons. The Serbian people, wherever they were, clearly said no to fascism," he said.

If we forget fascism, it would mean that it could return in an even more grotesque form, and victory is written with the truth, he said and referred to the situation in the region.

"We will not agree to humiliation in the region, especially from those who greeted Hitler's army with flowers and who carried out a pogrom against Serbs at the time when Belgrade was destroyed. Perhaps that would be understandable if it were not for the brutal and senseless attempts to make executioners out of Serbs instead of victims. "Serbs are guilty today because they opposed the Ustashas," the president said, adding that Serbs would no longer remain silent and flatter each other.

"I am proud of the fact that I am leading a generation that wants to preserve peace. They will not bow their heads and tell lies to please someone. They will bravely and with dignity protect the past, present and future. You can insult Serbian people, each of us, but as president, I will not allow you to insult the victims, and when you say that I am arrogant and rude because I speak the truth in person, my answer is that I will be even more arrogant and rude because you humiliated Serbia, so that we had nowhere to go. However, the spirit of freedom in Serbia had risen, so you will not be able to crush Serbian nation ever", Serbian President concluded.

He also pointed out that Serbia is progressing faster than its neighbors and is helping everyone who needs it.

"We also want you to catch that rhythm, to worry a little less about how to do something against Serbia," Vucic sent a clear message.

At the end of his address, the President of Serbia bowed to the shadows of all those who died, but also to the living heroes for everything they did for Serbia and our people.

"For us, May 9 is the Day of Victory, the Day of Symbol, the Day of Hope and the Day of Triumph of Good over Evil, the victory of life over death and the victory of the victim over the executioner," concluded Vučić. Ceremonial Academy on the occasion of the Victory Day over Fascism was held at the National Theater, in the presence of President of Serbia, Aleksandar Vučić.

The ceremony at the National Theater was organized by the government's Committee for Nurturing the Traditions of the Liberation Wars of Serbia. Victory Day over Fascism in the Second World War - May 9, as a national holiday in Serbia, is marked by a series of events over the weekend, from laying wreaths, through concerts to fireworks, and on that occasion an honorary artillery fire was heard from the Sava Terrace with the highest military honors.

The City of Belgrade, the Russian House in Belgrade and the Immortal Regiment organized a series of two-day ceremonies, with the support of numerous media partners and organizations dedicated to nurturing a culture of remembrance, on the occasion of celebrating the Day of Victory over Fascism and marking the 80th anniversary of start of World War II.