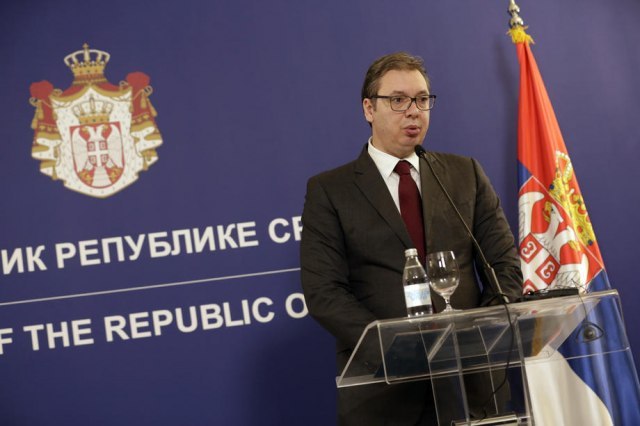 He said that we are working hard on that issue, and that based on what he sees today, especially after the newly elected U.S. President, Joseph Biden, took office, there will be pressure only on Serbia again.

Vučić replied to the statement that Serbia can join the EU only "together with the neighboring state of Kosovo", which it does not recognize, and the question of when that will change:

"You say it's a neighboring country, we don't. It's a matter of the EU's vision and condition. We see it differently. Yes, and we have to find a compromise with Pristina and work hard on it. For you, it's something that's been done since 2008. But for us it is not so, of course. For Madrid, Athens, Nicosia, Bratislava, it is also not so clear, they do not recognize Pristina."

Asked what that compromise might look like, Vučić said that he was worried, because, according to what he sees today, and especially after the inauguration of US President Joseph Biden, only Serbia will be pressured again.

"I am just worried. If we want to maintain peace, if we want more investors to come from Germany, then we need sustainable solutions. I do not believe in frozen conflicts, unlike most people here, because there is always a danger that one day someone will come and unfreeze them," the President of Serbia emphasized.

"We need to talk to everyone"

When asked with whom it is easier for him to negotiate - with Russian President Vladimir Putin, Turkish President Recep Tayyip Erdogan, Chinese President Xi Jinping, or French President Emmanuel Macron, or German Chancellor Angela Merkel, Vucic underlined that he must talk to everyone and that they also talk between themselves.

During the interview, he expressed his desire to say something about Chancellor Merkel, since she is leaving politics at the end of the week.

"Honestly, I think all the best about her and I want to say that now. She saved us in 2015, ensured peace here. We do not share same opinions always, for example when it comes to Kosovo. But she always has time to listen to us, showing respect for our country", he said. Asked who will lead Europe after Merkel, Vučić said that, when it comes to countries, Germany and France will do it, and when it comes to personal solutions, he does not know, he says, whether it will be Armin Laschet or Marcus Seder.

"However, without any intention to offend Seder and Laschet - I would always choose Angela Merkel. She is rather complicated person, but I am really very fond of her", Vucic said.