Vučić: No one can kill in Serbia; "They used acids, delivered severed heads" VIDEO

President Vučić said that a group suspected of the most serious crimes - murders, kidnappings and drug trafficking, as well as extortion, was arrested today. 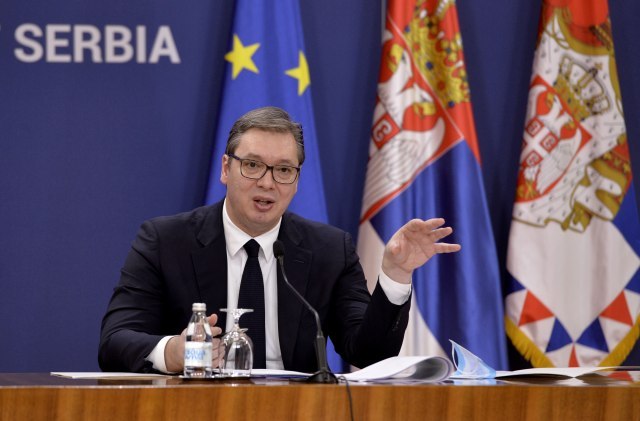 Vucic praised the cooperation between the Ministry of the Interior and the Prosecutor's Office for Organized Crime.

Vučić also thanked the security services and said that this was "a big blow for the mafia".

"Excellent cooperation between the Ministry of the Interior and the BIA has led to good results, it has led to the fact that we can provide greater security to people throughout Serbia," said Vucic.

He pointed out that it was a difficult, important and serious continuation of the responsible fight against the mafia and all those who, as Vučić said, thought they were stronger than the state, because they were even connected with those in the state system.

"This is a big blow for the mafia and organized crime," Vucic said. He praised everyone who participated in that action and pointed out that it was not an easy task for them, because they "put their safety and the safety of their families" at stake for the safety of the citizens of Serbia.

"I don't think there is a citizen in this country who is not satisfied that the state has shown that you cannot commit the most serious crimes without being punished", he said. He said that the crimes committed were related to murders, kidnappings and drug trafficking, as well as extortion.

"I am happy that the police and the minister did a good job and I believe and I hope that this fight will continue, because that is what awaits Nis, Vranje, Subotica...", he said.

He said that the police knew about many abductions and kidnappings and that they assumed that those people were no longer alive, but that there was not enough evidence for many things. "They thought there was no body, no deeds, and you have known for months that people are disappearing and you assume that they are not alive," he said.

"You look at some footage and you see that someone enters the building and doesn't come out anymore. But we have no evidence that that person was killed. Could this have happened five months ago? No way. We've been following them for months and we know their whereabouts. They were preparing snipers, they fired rifles in the villages and we were aware who was supposed to be the target. We know everything", said Vucic, adding that the moment of conducting operation could not have been chosen, because the police had been working on it for a long time.

He also said that criminals use special networks for communication, they use acids to destroy traces.

Big blow for the mafia

"The state won, do you want me to tell you who should have been their targets? You think that the state has not followed that for months?", he asked.

He said that it was not a question of the football club, but that no one could kill without facing with the consequences of one's acts.

He said that he was wiretapped in order to protect the mafia.

"Everyone in Serbia is finished, those big, well-known drug dealers, criminals. As for freedom, we will see what the court will do," he said.

He added, on his own behalf, and on the behalf of Prime Minister Brnabic and Minister Vulin, that they would deal with them at any cost.

Ministers should wake up

President Vučić said that it was his obligation to report to the Government on Kosovo and Metohija. "I informed them about everything that happened in Paris and Brussels. The situation is not at all easy, not at all simple, but we managed to fight with a firm and dignified policy for the preservation of our national interests and for the survival of our people, and I would say Serbia where would some that she does not exist, "he said.

He said that the situation regarding Kosovo and Metohija is not good. "They are not and will not be, the one who tells you that is a liar. We have to fight for the interests of our people, to fight for their safety and security. And that things will be like milk and milk because we will have someone's support, we never will, ”he said.

He added that with his advice and requests, he influenced the ministers regarding the issue of spending money. He added that he asked them not to deal with the elections now.

"Every minister should set a goal for himself and fight hard to achieve that goal. I hope that some will wake up, some will continue to work, and some will be even more successful," he said.

He added that he did not want to be compared to those who, as he said, destroyed the country.

He asked the ministers to continue working and for their results to be measurable. "Everything that is measurable, Serbia must be the best in that," said Vucic.

He said that he made it clear to each of the ministers who he meant, and that he asked them to show greater unity. "I am disgusted when I find out that they report the worst about their colleagues, so that some ministers can provide themselves with better treatment in the media," he said.

Brnabić said that she would present a report to the citizens on Saturday about 100 days of the Government she leads. She mentioned that she would invite President Vučić to participate in the sessions once in two or three months, she said.

As she said, Vučić told the Government today everything about the visit to France and the talks on Kosovo and Metohija. "We also discussed the topic of the fight against corruption and all the actions that took place," she said.

They discussed the current position of Serbia, which, as he says, is unbelievable in every sense. "We are recording unprecedented results, we are second in Europe in terms of vaccination, so we should take care how to keep those results and further improve Serbia's position," Brnabić said.