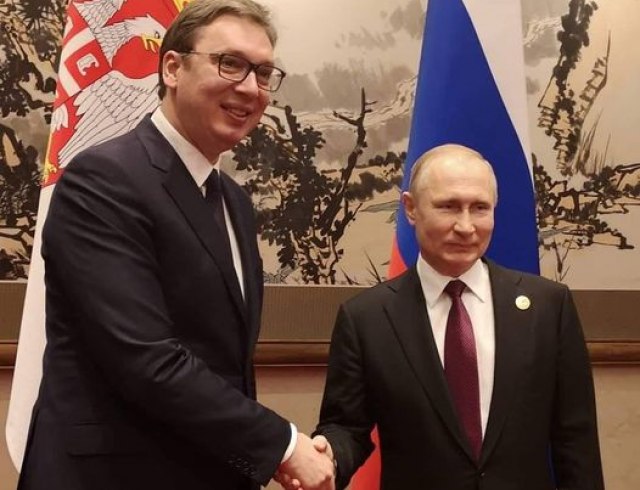 According to the statement, the two presidents ascertained that no one can destroy the friendship between Serbia and Russia, and that relations between the two countries are stable and on the rise.

On this occasion, President Vučić thanked President Putin for his support in the fight against coronavirus, and especially for the delivery of the Sputnik V vaccine, because it contributed to our country leading the way in vaccinating the population. President Vučić asked President Putin to help us get additional quantities of the Russian vaccine as soon as possible, so that as many Serbian citizens as possible would receive reliable protection against the coronavirus as soon as possible. He also emphasized that Serbia, with the help of experts from Russia, will build plants and produce vaccines independently.

The two statesmen discussed a whole range of topics covering the areas of bilateral cooperation, as well as regional and international situations.

President Vučić and President Putin stated that Serbia and Russia have confirmed a high degree of mutual understanding and friendship in the past period, marked by difficulties brought about by the coronavirus. President Vučić expressed his gratitude to President Putin for the message that Minister Lavrov read in the Temple of Saint Sava.

Vučić confirmed that Serbia intends to further develop strategic relations with Russia and stated that the opportunities for economic cooperation are much greater than it used to be. He therefore said that special attention should be paid to increasing trade, completing current and launching new joint energy and infrastructure projects, and further strengthening cooperation in the field of technological development and innovation, as well as military-technical cooperation. In that regard, President Putin emphasized the importance of the work of the Intergovernmental Commission for Cooperation.

Vučić emphasized the importance of the Balkan Stream gas pipeline, which contributes to Serbia's energy stability.

Discussing the regional situation with President Putin, President Vučić thanked President Putin for his unwavering personal support for the territorial integrity and sovereignty of Serbia, as well as for the active support of the Russian state on the issue of Kosovo and Metohija.

"Russia understands our efforts to ensure peace and stability in the region and Serbia's readiness for dialogue and compromise as the only way to resolve open issues," President Vucic concluded.