Vučić at the meeting with Macron today - three key topics

President of Serbia, Aleksandar Vučić, stated in Paris, where he will meet today with the President of France, Emmanuel Macron. 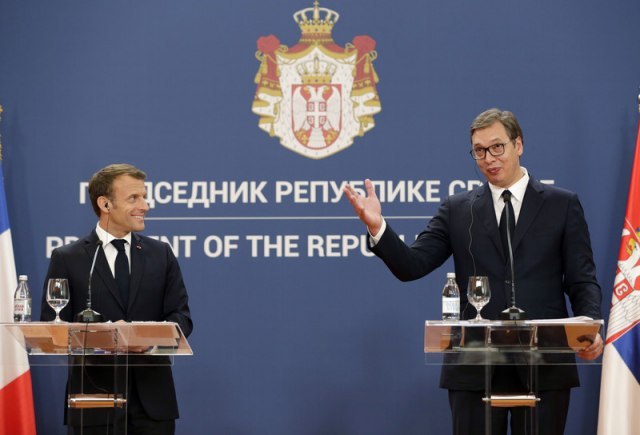 This will be their 11th meeting, and the key topics will be Kosovo and Metohija, Serbia's European integration and bilateral relations between the two countries.

"We will discuss many important things, this is our 11th meeting. Marcon is one of the most important world leaders and a sincere friend of Serbia, and his visit to Serbia in 2019 was of historical significance for our relations and since then, our political and economic cooperation have just an ascending level ", said Vučić for TV Pink.

He conveyed that the key topics will be Kosovo and Metohija, European integration of Serbia, as well as bilateral relations between Serbia and France, among which the most important are economic benefits.

When it comes to Kosovo and Metohija, Vučić pointed out that France will preside over the EU in the first half of 2022, and that country, he says, wants certain results to be achieved by then. "Having in mind the gravity of the situation we are facing in the entire Balkans, it is not easy at all, but I will be very honest and talk openly to Macron about it," Vucic announced.

"We should open more chapters, through the so-called clusters by June, and twice as many by December. But we must do important things in the area of the rule of law and progress through the economy," Vucic said.

When it comes to bilateral relations, Vučić reminded that the trade exchange between Serbia and France reached 1.2 billion in 2019, and would be, he says, even higher today, instead of falling by six percent in 11 months last year, due to the coronavirus pandemic.

Vučić said that the projects he is implementing with French companies are important for Serbia, "Suez" for the Vinča landfill, the airport that "Vinci" is building at high speed, but certainly the construction of the subway.

"The construction of the subway is no longer just a story, an election story, but a reality that will happen. With the subway, Belgrade will gain important advantages, becoming equal with many important European centers," said Vucic.

When asked whether the deadline for its construction is 2028, Vučić said that he would try to finish it by the end of 2027 or 2028.

"Tomorrow we will talk about it more precisely and more, I will discuss it with Macron as well. The financing has been resolved, 80 million through the French bank, the rest through commercial banks. We have no problem with public debt," Vucic said.