President of Serbia, Aleksandar Vučić, and Prime Minister Ana Brnabić are chairing the session of the state leadership and the Operational Team for Vaccination. 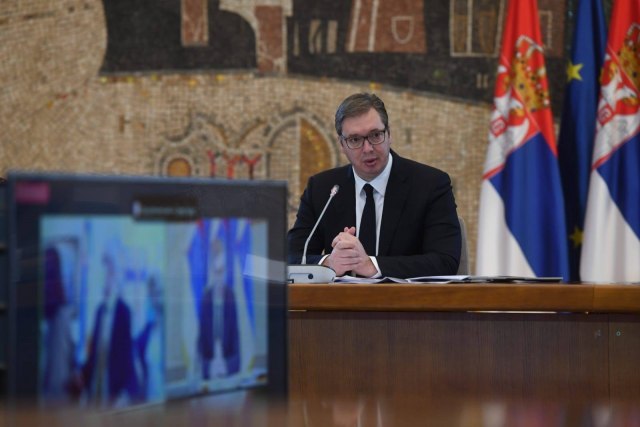 President of Serbia thanked all health workers who fought against the coronavirus.

He pointed out that the state was forced to deny certain things to young people in order to save the lives of older fellow citizens.

"We were the first from this part of Europe to apply for the COVAX program. I believe that the European Union will understand the needs of us from the Western Balkans," said the President of Serbia.

Vučić announced that another 250.000 doses of the Russian vaccine will arrive in Serbia today or tomorrow. He emphasized that care should be taken because only the first and second doses are different with the Russian vaccine. "Mass vaccination with the Chinese vaccine is starting today, and as far as I have seen, it has shown the least unwanted indications in the world."

The President of Serbia appealed for the vaccination of police officers, educators, journalists, and employees of public companies as soon as possible.

Vučić especially emphasized to the Torlak Institute that "their vaccines do not stay in the refrigerator". "Every day when we gave the vaccine, we protected someone's life and removed one link from the chain of diseases," said Vučić.

As he said, after being vaccinated in a nursing home in Šabac, the vaccine managed to develop antibodies in the majority of users, which prevented the death of 40-50 people. Vučić said that many doctors and medical staff will be needed for mass vaccination.

Prime Minister Ana Brnabić said that the goal of the information system that was made was to vaccinate as many citizens as possible and to register it correctly and for the country to fight the epidemic as soon as possible.

"The challenge all over the world is how to administer vaccines, that is, to enter them into the system. So far, everything has been done on paper. That system cannot be monitored. This new system allows us to monitor the vaccine from the point when it arrives to Serbia, when it is delivered to the two warehouses until the vaccine arrives at the health center, bottle by bottle, and when the citizen is vaccinated", Prime Minister of Serbia stated. According to her, this system will further enable the development of e-health.

Brnabić appealed to the citizens to apply for vaccination. She said that a vaccination point is opening today at the Belgrade Fair.

The Prime Minister announced that the Government will work on opening such checkpoints in other municipalities as well.