President of Serbia, Aleksandar Vučić, visited the household of Jovanka Djurić, a single mother of nine children in Laćarak. 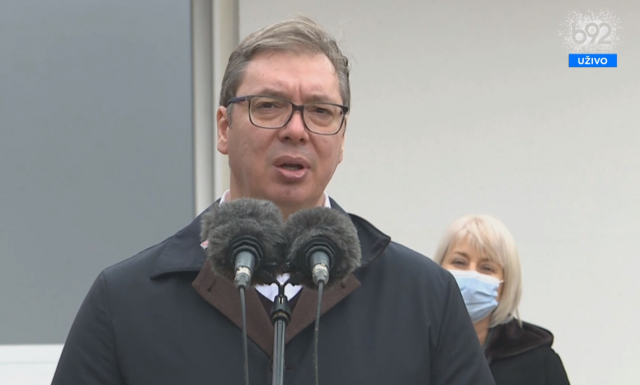 The president visited the same family at the end of 2019, because, as he said at the time, he wanted to visit the family of a wonderful woman before the New Year, with nine children, whose husband passed away a few years ago.

The president talked to the family about their problems and promised state assistance.

Jovanka lost her husband almost three years ago and is raising seven sons and two daughters on her own, and the family lives off the pastry shop "Nine sweets" and a child allowance of 15.000 dinars.

Today, the Minister of Agriculture, Branislav Nedimović, who is from that area, also visited the family with President Vučić.

"There are a lot of poor people, but you can't say that about Jovanka"

At the beginning of his address to the media, the president said that he will help this family. He said he was grateful to this family for their hospitality.

"Regardless of the fact that Serbia is progressing, there are still many poor people. It cannot be said about Jovanka, she has nine children," Vucic said, adding: "Children are the future, everything we do, we do for the sake of children." When it comes to Sremska Mitrovica, the president announced a large project for the construction and reconstruction of the hospital. “I think that’s crucial,” he says.

There is no more important task than to ensure the demographic progress of the country, because without children, Serbia will not exist either, President Aleksandar Vučić said today, adding that it is very difficult to find the right measures to stimulate the birth rate.

"It is very difficult to find the right measures, and no one in the world has researched or found them to the end," Vučić stated in Laćarak, where he visited the Djurić family, a single mother with nine children.

He announced that a summit dedicated to demographic policy could be held soon, with a discussion with Katalin Novák, the Hungarian minister in charge of population policy, citing Hungary as a good example, which, he says, managed to stop the big drop in birth rates. "With the support we give to mothers and families, which is greater than ever, we manage to achieve certain results in different parts of Serbia," said Vučić when asked if measures to stimulate the birth rate give results. He also noticed that fewer children are born in richer parts of the country, for example in the richest Belgrade municipalities.

"It is the same everywhere in the world, and why is that happening - I am not able to explain," said Vucic.

He pointed out that certain measures cannot be adopted for one part of the country, and other measures for other parts, because that would violate the Constitution.

Vučić also stated that the minister in charge of that issue, Ratko Dmitrović, has a lot of work ahead of him.

"Let them deal with it, let them find solutions, because there is no more important task than to ensure the demographic progress of the country. Without it... I can only pray and reiterate constantly that Serbia will not exist if there are no more children," said President Vučić.

"I believe in the vaccine"

Answering the questions of the journalists, Vučić said that no one from his family received the vaccine.

"I reckon, the father doesn't have to now, he will have antibodies," he says.

He also explained that he did not want to be vaccinated first, but that he believed in the vaccine.

He called on citizens to get vaccinated.

He did not answer the question which vaccine he will receive, but he said that he will definitely be vaccinated.

"There are far fewer people who will not receive it than what it looks like on the networks," he adds about citizens who are against vaccination on the social networks.

As he further states, the vaccine saved humanity, but in every society there are those who think differently, but "there are also those who don't think at all".

"We still haven't decided on the military service"

"For the next Christmas day, you can ask me about the elections. It is not an easy year of fighting with the coronavirus, pressures around Kosovo and Metohija and RS are ahead. Not an easy economic year is ahead, because everyone will ask the state for help. Serbia offered the most assistance proportionally according to its budget. Certainly, a difficult year awaits us, there are many challenges ahead of us", he explained.

He said that the candidates mentioned as his potential opponents are "very serious, and that it is possible that the two of them will go to the second round with him, so they will have to decide among themselves." When it comes to the introduction of military service, he says that he is still weighing on this.

"It is not a military service that would last a year," the president states.

According to him, there are positive things, but the important question is how much it would cost the state.

When asked who is behind the wiretapping, Vučić answers: "I said I think I know who is behind it. I don't know what Vuin said, but I have some of my wiretapped conversations in my possession. If you need more evidence - just tell me what that might be. I won't give it to you because I won't endanger the state."

This issue is not a big problem for him, except in the sense of who needed it and for what purpose.