The plane with medical equipment, which was sent by the United Arab Emirates as a donation to Serbia, landed in Belgrade today at around 1:30 pm. 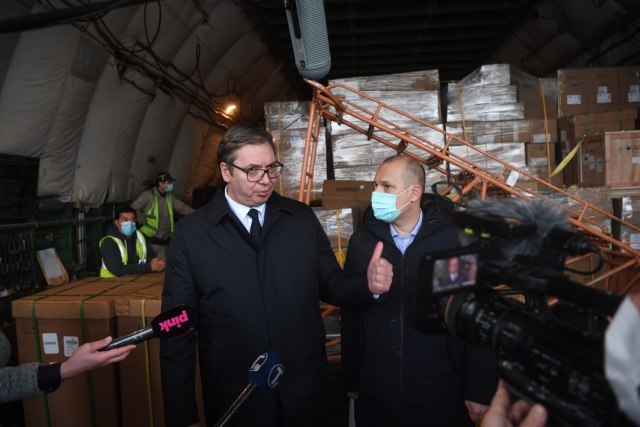 The President of Serbia pointed out that they sent "everything that exists" from the Emirates.

"We will deliver a strong blow to the coronavirus" he said and thanked his friends from the Emirates for, as he stated, the plane full of goods.

"This equipment and aid means a lot to us. Only one magnetic resonance weighs 14.5 tons, imagine what it all cost in this plane," Vucic added.

Vučić said that it was assistance that did not cost Serbia a dinar, and even the transportation was organized by a great friend of Serbia from the United Arab Emirates, Sheikh Mohamed.

"We didn't deserve this except the friendship we have with him. This is enough to provide for the equipment for one COVID hospital," he added.

Vučić stated that the obtained equipment is now going to the warehouse, from where it will be distributed to hospitals and clinical centers throughout Serbia, where it is most needed.

He announced the opening of the first block of the newly renovated Infectious Diseases Clinic in seven or eight days.

Vučić pointed out that Prime Minister Ana Brnabić received the Pfizer vaccine, that the President of the Parliament will receive another approved by our agency, as well as he himself, all with the aim of proving their safety. The United Arab Emirates also sent a plane on March 29 with the first part of the aid with protective means for combating coronavirus.