The President of Serbia, Aleksandar Vučić, said that he was very clear in his statements about politics and dialogue with Priština 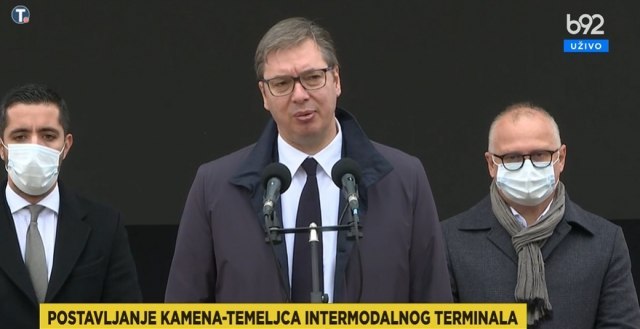 "They have their internal problems. My statement was precise and clear, I was talking about the need to avoid a policy of frozen conflict and that a frozen conflict could lead to a conflict in the future, which no one would want to happen," Vucic said.

"Some attacked me for betrayal here in Belgrade. Those who do not want to listen to what I am saying, I cannot help them," he added.

Vučić emphasized that the policy of peace is important for Serbia.

"It is important for me that we keep the peace and that will be the policy of Serbia," said Vucic.

"It is easy to criticize those who work"

As for the measures in the fight against coronavirus, he commented:

"When we close - why do you close, when we try to avoid introducing lockdown, they ask why."

As he further states, we were able to estimate what the right measure is, without endangering the economy.

"Attacks on doctors are inadmissible and that is why I will demand the harshest punishment for thugs who attacked a doctor at the Infectious Diseases Clinic. Let them complain that I am putting pressure all they want, I will insist in asking all state institutions ten times who dared to treat doctors like that, especially the people who take care of the patients day and night", Vucic told reporters.

He stated that he saw and heard about some more cases, that is, that "dealers and pimps who were promoted during the recent demonstrations" created similar problems.

"We learned from them, they create even bigger problems in some other spheres, but that is already a sphere of crime and I believe that the competent authorities will deal with that as well", Vučić said.

Two young people, a young man and a girl, attacked a doctor from the Infectious Diseases Clinic and broke down one door, said the Minister of Health Zlatibor Lončar yesterday.