Vučić: 1.800.000 doses provided; the first vaccines before the end of December

The President of Serbia, Aleksandar Vučić, is addressing the public regarding the current epidemiological situation in Serbia. 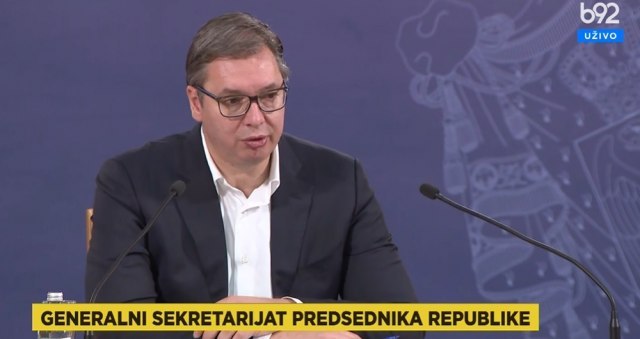 "The most important thing is health. Together with the Government, we set out in search of vaccines, to provide vaccines in the easiest way, to first reduce and then stop the catastrophic effects that coronavirus brings," he said, adding that Serbia has provided so far. 1.800.000 doses of the vaccine against COVID-19, and it will most likely be Pfizer.

He explained which groups are a priority for receiving the vaccine.

"By the end of January, we will try to provide enough vaccines for the health system, the army and the police that are most affected. Immediately after them would be those who are already ill, as well as the elderly. In the end, middle-aged and young people," Vucic said.

"A very important message is that we will have the first vaccines before the end of December," he added.

He was in a meeting today with the Ambassadors of the Quint and Sem Fabrizi.

"The Nagorno-Karabakh conflict has shown how a frozen conflict can turn into a catastrophe. We must learn lessons from what happened in the 1990s, but also from what has happened now. We should not leave the frozen conflict to our children. The most important message for us is the message of peace and the desire to continue the dialogue with Pristina", he said.

He appealed to the Government of Serbia to have more members of minorities in the government, as well as the provincial state bodies.