Thaci after presented with the indictment: I'm not guilty, indictment baseless VIDEO 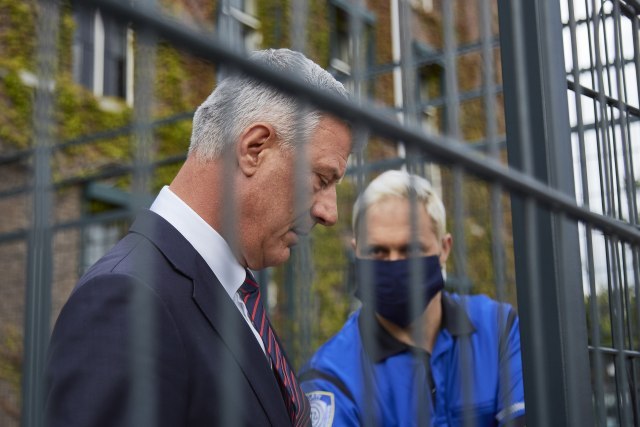 Hashim Thaci, one of the founders and a member of the General Staff of the terrorist paramilitary in Kosovo, the KLA, stated today that he is not guilty and that he does not admit the charges against him by the indictment of the specialized prosecutor of Kosovo.

"Your Honor, the indictment is without any basis and I declare that I am not guilty on any of the 10 counts of the indictment," Thaci said before the judge for the previous procedure of the Specialized Chambers of Kosovo based in The Hague.

He denied charges of war crimes and crimes against humanity between March 1998 and September 1999.

Thaci is charged with 10 counts of war crimes and crimes against humanity. These are: 1. persecution on political and / or ethnic grounds, 2. imprisonment, 3. illegal or arbitrary arrest and detention, 4. other inhumane acts, 5. cruel treatment, 6. torture, 7. torture, 8. murder, 9. murder, 10. enforced disappearance of persons.

Reading the indictment, the Prosecution pointed out that there was a well-founded suspicion that he had committed the aforementioned crimes as a member of a joint criminal enterprise, as well as in the capacity of other members of the KLA.

At the beginning of the hearing, one of Thaci's lawyers, Dennis Hopper, stated that Thaci's defense found out about the indictment only on Thursday night and that it failed to prepare.

Until recently, the president of self-proclaimed Kosovo will remain in custody until further notice, although the judge taught him that he has the right to request release from custody and defense.

Thaci, along with Kadri Veseli, Jakup Krasniqi and Rexhep Selimi, is charged with a joint criminal enterprise of forcibly taking control of Kosovo, for various types of criminal responsibility for war crimes and crimes against humanity.

He surrendered to the Specialized Prosecutor's Office on Thursday, November 5, after he resigned as president of the so-called Kosovo, and then he was arrested and transferred from Pristina to the detention unit in The Hague, where he will remain until further notice.

He will be held accountable before the Specialized Chambers in The Hague, also known as the KLA Crimes Tribunal, for both command and individual criminal responsibility for crimes committed by the KLA in Kosovo and Metohija and northern Albania during the period covered by Kosovo Special Prosecutor Jack Smith's indictment, from March 1998 to September 1999.

The charges, written in 10 counts, include, among other things, 98 murders, 18 known victims of enforced disappearances and more than 416 illegal detentions, which were carried out either on his orders, or with his help, support or with his knowledge.

The exact number of illegally detained and tortured in the camps was not published in the redacted indictment, because the numbers were omitted in the tabulation of victims in some cases.

Along with what the prosecutor called KLA General Staff members Kadri Veseli, Rexhep Selimi and Jakup Krasniqi, Thaci was accused of a "joint criminal enterprise" involving other KLA members and political advocates of Kosovo's independence. to Serbia.

Thaci was the political commissioner and commander, Veseli the head of the intelligence service, Selimi the chief operative, and Krasniqi the deputy commander and spokesman.

According to the indictment, these opponents, i.e. their victims, are listed as: persons whom they considered to have cooperated or associated with the forces of the Socialist Republic of Yugoslavia (FRY), officials of state institutions, then those who did not otherwise support goals or means of the KLA, as well as persons of Serbian, Roma and other nationalities.

In order to achieve the goal of the joint criminal enterprise, Thaci and others are charged with criminal offenses described in the indictment, which include persecution, imprisonment, illegal or arbitrary arrest and detention, other inhumane acts, cruel treatment, torture, murder and enforced disappearance.

Thaci, Veseli, Selimi and Krasniqi are also charged with crimes committed by their subordinates, which are described in detail in the indictment, because, according to the prosecution, they knew that the crimes had occurred or would be committed and did nothing to prevent them, nor to punish the perpetrators.

The indictment details dozens of events in 1998 and 1999 in which people were abducted on the streets, in their homes and taken to the improvised camps throughout Kosovo and Metohija, where they were severely abused, interrogated, humiliated and forced to confess to cooperating with Serbian authorities and espionage.

The redacted indictment, which is available to the public in English, did not name the victims, living or killed or missing, but described the events that followed the detentions in 15 KLA camps in Kosovo and Metohija and two in northern Albania, in Kukes and Has.

A chart overview of the camps and the periods in which the crimes took place is also given, without a name, but with an indication of the approximate number of victims.

Most of the same charges were brought against Veseli, Krasniqi and Selimi, who will plead guilty today and tomorrow, all at special hearings.

The indictment does not mention the so-called "Yellow House" and organ trafficking in northern Albania, which initiated the establishment of the Specialized Prosecutor's Office and the Kosovo Council, after being described in a report by Council of Europe Special Rapporteur Dick Marty.