Vučić: The devil is always hiding in the details VIDEO

Serbian Government held a special, thematic session dedicated to Kosovo and Metohija and the GDP issue, attended by the President of Serbia, Aleksandar Vučić. 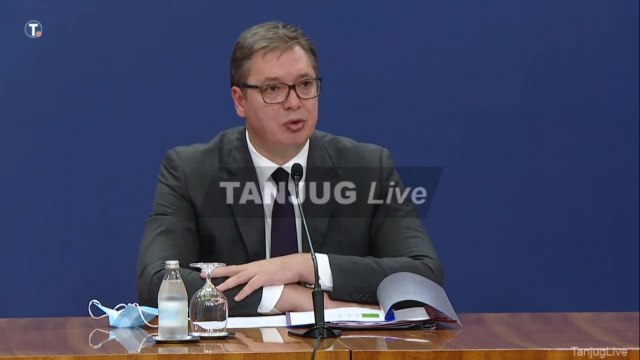 According to him, there are three important topics - the first Kosovo, the second GDP and the third coronavirus pandemic.

"I informed the Government about the course of the dialogue," Vucic said at the beginning about the first topic of conversation.

According to the president, when it comes to the coronavirus, Belgrade is an even more pronounced hot spot, and there are more and more problems in the capital.

When it comes to the problem of Kosovo and Metohija, Vučić states that Serbia cannot accept Pristina's position that the Community of Serbian Municipalities will be formed after the recognition of independence, because that is an unconditional commitment provided by the Brussels Agreement.

"Serbia cannot accept that Pristina does not fulfill its obligations and that it is important for Serbia to recognize Kosovo's independence. They have committed themselves to the CSM. This puts us in a situation where Albanians do not want a compromise solution," he said, adding that recognition is meaningless for Serbia.

The relationship between the economy and Kosovo and Metohija is in one significant part interdependent, and that has always been known, states President Vučić. He adds that he thinks that our people are more and more educated about the problems we are facing.

As he further states, his last conversation with Amfilohije was different than the one two years ago, and on that occasion he told Amfilohije that they understood the position in which Vučić was. For what he claims - the president says that there are witnesses.

When it comes to "Mini-Schengen", a decision will be made by November 10 that the territory of Northern Macedonia and Albania can be entered without a PCR test and only with an ID card.

"I don't want to play a tough guy"

Yesterday, during the farewell of Bishop Amfilohije, they also talked about Kosovo. Matija Bećković emphasized that the one who betrays Kosovo will betray the entire Serbian people. When asked how he comments that those who support Zdravko Krivokapic, who does not intend to withdraw the Montenegrin recognition of Kosovo, swear to preserve Kosovo, and how exactly he swears to preserve Kosovo, and supports its independence, Vucic answered:

"As I avoided answering accusations unfounded of that type, but to explain with arguments - so I will this time. I am grateful to all the people who wanted to show the unity and togetherness of our people. I have been listening to 'the one who betrays Kosovo' for eight years and for eight years they tell me that I will betray it, and I try to fight for our people in Kosovo and Metohija every day. While some were typing on the keyboard how ugly I was, I worked all day and could not be with my children, and so countless winter and summer vacations. It is no coincidence that Serbs in Kosovo and Metohija almost always supported a rational and responsible policy", he said, adding:

"In the end, we all came down to them telling us about the Kosovo vow. All admirers and favorites of great and important Serbs cannot do something in this situation, but let us leave it to Vučić to fight alone, and we will make things harder for him. Kosovo declared its independence in 2008, I was not even close to the government then. The reaction of the authorities was stupid and irresponsible. From all this, we managed to return to the table with a smart and wise policy and to talk about Kosovo today. We just keep quiet and tell the truth".

As he further states, he will not pretend to be a hero even today, but will continue to say that we need a compromise solution and peace.

The community of Serbian municipalities is a key topic in the conversation with Pristina, and as Vucic states, "the devil is always hiding in the details." As he says, Serbia is not giving up on what is written in the implementation plan, and those details unequivocally and clearly show that we are right when it comes to the CSM.

When asked who was bothered by his departure to Podgorica, the president stated at the beginning that it was his decision, and that his relationship with Amfilohije was better than before.

"My wish is to go to the funeral. Now if I tell you how surprised I was and who was bothered by my arrival... I know who was not happy that I am there," he says.

He states that the funeral was not the place and time for him to speak.

"It was an obligation for me to be there, to bow and nothing more," he explains.

Expressing condolences to the family of the deceased worker of Krušik

When it comes to the situation that happened today in Krušik, when one worker was killed, Vučić states:

"I am convinced that responsibility will be established. I express my condolences to the family of the deceased worker of Krusik."

Let us remind you, the worker of Valjevo's Krušik, M. J., died today at the Begova Voda training ground in the village of Zlatarić near Valjevo.

The Serbian Defense Ministry said that one Krusik munitions plant employee was killed and another injured in the explosion of a missile warhead of an anti-armor missile.

When asked if curfew shows the impotence of the state, Vucić states that there are many helpless people in Europe then.

"Whatever the Crisis Staff says, we will have to do, and my request to them is - we have to pay salaries," he says.

As he adds, it would be better to adhere to all measures, because the recommendations of the Crisis Staff must be respected.