Vučić; A big assignment for the new pro-European government PHOTO 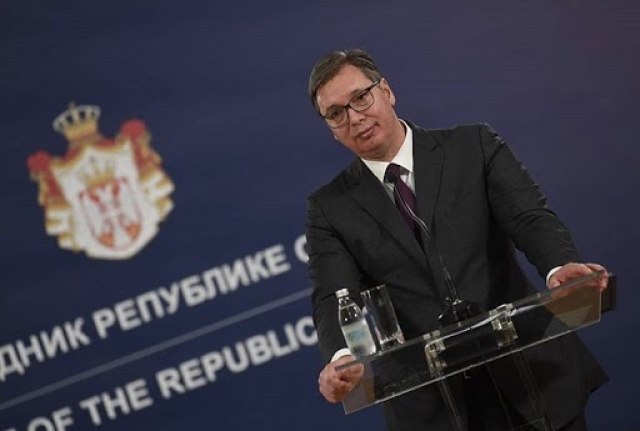 "I would like to express my satisfaction with the visit of a true friend of Serbia," Vucic said on that occasion.

"I spoke openly about my shortcomings, about what I am guilty of, it is good to take it upon myself. We talked about the Report, it is always good to see political issues, they had nothing to tell us about economic ones. There are special criticisms that I used my position of the president of the republic and thus won the votes... It doesn't matter, I will answer when the time comes. I pointed out only to a single project that is directed against Serbia," he says.

Varhelyi stated that after the formation of the new government, they will cooperate in order to achieve all the goals that will lead to the opening of new chapters in the negotiations.

“We have a fresh start ahead of us,” he adds.

Vučić states that he did not always say the best words, but as he states, he apologizes to the people of Serbia because he thinks that the president should think for himself.

"My fault is that I proposed a stricter curfew, because of the use of force, because of the purchase of Pantzir, because of the election... There is a long list of my grave sins, I accept them completely," he says, adding that he stated that no one should touch the protesters "until they take over an institution."

But, as he states, his job is to protect the country.

Varhelyi on the EC Report on Serbia

European Commissioner Oliver Varheyi says that he discussed with the President of Serbia about the annual report of the European Commission on Serbia and that he noticed that some progress has been made, but that more has to be done.

"We encourage the new government to implement reforms that must go hand in hand with investments, so that they can be realized," said Varheyi at a joint press conference.

He pointed out that the EU attaches great importance to the rule of law.

"We will have to start working with the government to speed up the work, in order to achieve all the goals, in order to open new chapters in the pre-accession negotiations with the EU," Varhelyi said.

"As for the pandemic, I am proud of the work of state bodies, our staff," says Vucic.

He points out that he is proud of the fact that human lives were most valuable to him.

"People's lives were much more important than whether someone likes me or not. I was not guided by selfish personal political interests, but by the struggle for life, which I am obliged to lead as president," Vucic said.

The President of Serbia showed the report of the European Commission from 2008 in Serbian.

"I brought it to show, because there is a detailed report on all demonstrations when Kosovo's independence was declared, on attacks on the gay parade, but not a word on the killed Ranko Panic, nor on the ban on movement issued against what was the biggest opposition party at the time," Vucic said.

He said that it is much more important for him today that he agrees with most of the things mentioned in the EC Report, but as he says - "we evaluate them differently".

"We only evaluate them differently, what they wrote about foreign policy is commendable," Vucic added.

He says that Serbian new pro-European government "has a big assignment" ahead, to speed up European integrations, to do a lot in terms of the rule of law and various things that are still missing.

Vučić says that he fully accepts responsibility for the steps he took during the coronavirus pandemic.

President Vučić commented on the information that leaked to the public that, together with the representatives of the National Convention, at the suggestion of one of them, he paid tribute to the Albanians found in the mass grave in Batajnica, saying that he would stand up for anyone killed in the conflict, with the hope that there will be no more conflicts.

Vučic thus answered the question to explain whether the information that he paid tribute to the killed Albanians at the meeting with the National Convention is correct.

He said that, by the way, it was agreed at the meeting not to disclose to the public what was said and what was happening at that gathering.

"I know that I did not tell anyone what was happening, and that the EU representatives and ambassadors were not the sources of that information. Enough about the morale of those who presented information from the gathering to the public," he said.

Vučić said that at that gathering he tried to answer every question, listen to all the people, hear their opinion, that he agreed with some, but not with others.

"One of those present, I think Naim Leon Beshiri, said at one point that we should stand up and pay tribute to the killed Albanians. Everyone got up, and I, as a decent man, will always stand up. I am always ready to pay tribute to every killed person. Of course I will", he said.

Vučić said that he did not want to talk about whether it was a trick, but that elementary decency ordered him to stand up.

"The fact that someone has no morals, so he brings to the public something that has been agreed to be held under "Chatham House Rule": share the information you received, but do not reveal the identity of who said it... My conscience is completely clear," he said.

The meeting was attended by the Minister for European Integration Jadranka Joksimović and the Head of the EU Delegation to Serbia Sem Fabrizi.

Varhelyi previously talked with Prime Minister Ana Brnabic and representatives of the National Convention on the EU (NCEU).