Vučić to announce the name of the Prime Minister designate tonight

President of Serbia, Aleksandar Vučić, will address the public today at 8 pm from the Palace of Serbia, it was announced from his office. 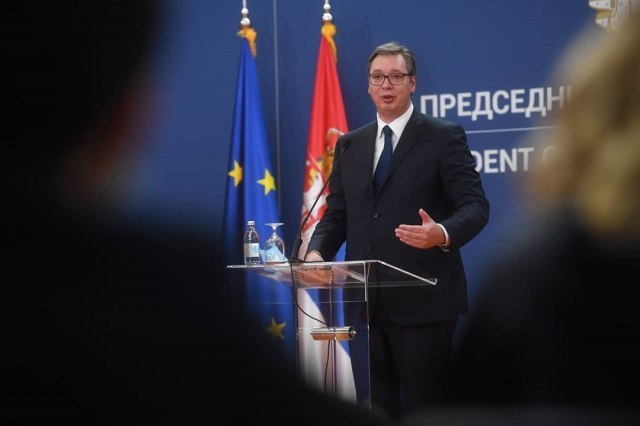 As it is stated, on the basis of constitutional authorizations, the President of the Republic will propose to the National Assembly a candidate for Prime Minister, after hearing the opinions of the representatives of the elected electoral lists.

B92.net reported yesterday that the president will announce to the public today the name of the prime minister-designate for the composition of the new government, after the meeting of the Presidency of the SNS, which is being held at 5 p.m.

You can watch LIVE broadcast of the address of the President of Serbia and the SNS, Aleksandar Vučić, on B92.net and TV B92.

Vučić's address in the Palace of Serbia will be preceded by a session of the Presidency of the SNS, and it is possible that after it, the Progressives will know which of them will be in Nemanjina 11.

The media have so far "assembled" several governments, with some of the current ministers "seen" in most of these "puzzles", including Sinisa Mali, Zorana Mihajlovic, Branislav Nedimovic, but also Maja Gojkovic, Goran Vesic, Marko Cadez.

However, Vučić said in an interview with the Austrian media over the weekend that he would recommend more significant changes than expected. He also said then that forming a government is not easy, because, he says, there are people in his party who think they have a leased ministerial chair. Other parties believe the same, although the SNS has a clear majority in the assembly, Vucic concluded.

"There was a lot of corruption and many were bad or did not work at all. Therefore, I will recommend more significant changes than expected, and that will be seen in the coming days," Vucic said.

Immediately after its formation, the new Government of Serbia, as well as the deputies, will have their hands full, since some topics have already been announced, and some are already being implied, such as the discussion on the budget for next year and the continuation of the European integration process.

Recently, Vučić himself announced that, as soon as the new government is formed and the assembly starts working in full capacity, the topic of Kosovo and Metohija will be presented to the MPs.

The state is also facing the challenges of the ongoing coronavirus pandemic, and perhaps the issue of a change in the Constitution will face the new majority in the Serbian Parliament.