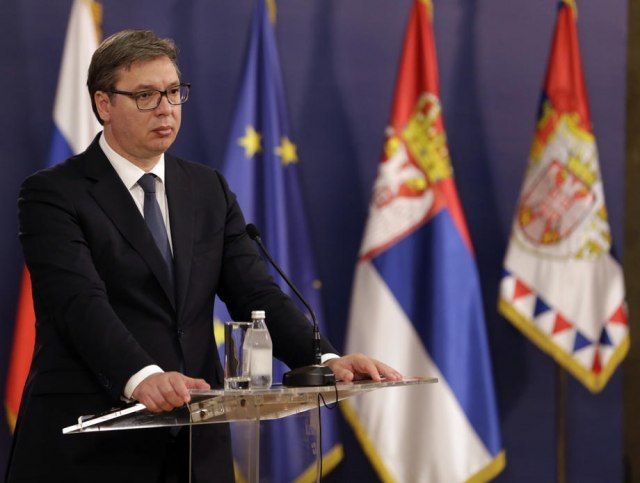 As he said, by defending its sovereignty and territorial integrity, Serbia is defending both international law and the fundamental principles on which the United Nations is based.

"I have the great honor to address you on behalf of the Republic of Serbia today, when we are marking the 75th anniversary of the founding of the United Nations," Aleksandar Vučić started his speech.

"This important anniversary is an opportunity to reaffirm our collective commitment to multilateralism and the principles we all accepted when we signed the UN Charter 75 years ago. We are proud of the fact that Yugoslavia - whose successor is the Republic of Serbia - was among the first fifty signatories and one of the members. the founder of this international organization, which has been operating for more than seven decades, serving as a universal platform for dialogue on an equal basis and playing a key role in maintaining peace and stability, protecting human rights and creating conditions for economic development around the world". he said.

As he says, it is not surprising that the Serbian people and their diplomatic representatives actively participated in all international efforts that led to the creation of the United Nations, having in mind their aspiration for peace among nations.

He adds that we are marking this anniversary of the UN at a time when the whole world is struggling with COVID-19 pandemic, a challenge that has hit the entire planet and which tests our readiness to act together, but at the same time reaffirms that the United Nations is needed today the same as when they were founded, and that its significance cannot be questioned.

"Unfortunately, at the end of the 20th century, we in Serbia experienced unilateral measures and actions, which undermined and called into question the effectiveness of multilateralism and mechanisms of international cooperation, as well as international law itself. Interim institutions in Pristina declared independence through a unilateral act and violated UN Resolution 1244, thus seriously undermining the security of Serbia and the region as a whole", Vucic said.

He said that Serbia is fully committed to finding a compromise solution to the issue of Kosovo and Metohija, as well as to pursue a responsible policy and make efforts to preserve the interests of its citizens and regional peace and stability.

"By defending sovereignty and territorial integrity, respecting Resolution 1244, Serbia is defending international law, the UN Charter, but also finally the authority of the Security Council," he said.