Fabrizi: Dialogue's in full swing, no reason for postponement

As a mediator in the dialogue between Belgrade and Pristina, the EU is ready to continue as fast as the two sides want, EU Ambassador to Serbia Sem Fabrizi said 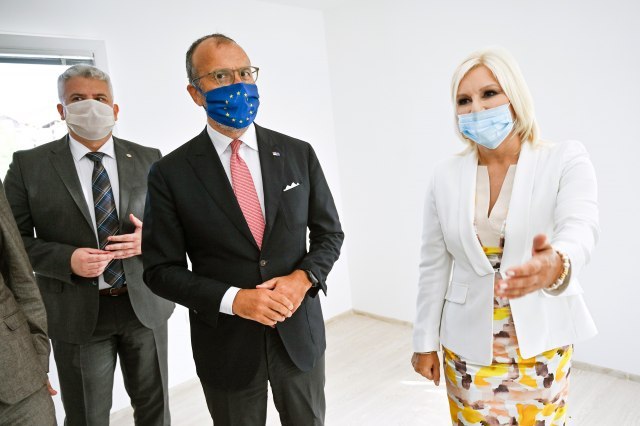 He added that the EU has made it clear that it sees no reason to prolong things further.

Fabrizi emphasized for "Blic" that there is no reason to talk about timelines or artificial deadlines for dialogue. However, as he said, High Representative Josep Borrell, EU Special Representative Miroslav Lajcak and EU member states have made it very clear that they see no reason to procrastinate.

Asked whether the dialogue between Belgrade and Pristina is in full swing, after the third round in Brussels, Fabrizi repeated Borrell's words that dialogue is "never easy" and that he can say "that the momentum is good".

"President Vučić and Prime Minister Hoti made full progress on the issues of missing / displaced persons and economic cooperation, so they could then set those topics aside and focus on arrangements for non-majority communities and resolving mutual financial claims," Fabrizi said.

He said the two new issues were first raised in Brussels on Monday, as part of negotiations on a comprehensive and binding normalization agreement.

Fabrizi emphasizes that these issues are very sensitive and that this will be reflected in the negotiations.

"We expect the next rounds of talks to be even more difficult," Fabrizi said, adding that, however, both sides are ready to engage in negotiations, which is positive.

The head of the EU delegation in Serbia also announced that the annual progress report will be published at the beginning of October and will cover the period from April 2019, when the previous one was published.

"The report gives the most important assessment of how Serbia stands in the process of reforms towards European integration, from the economy, the rule of law, through public procurement and innovation, to environmental protection and foreign policy," Fabrizi said.

He emphasized that everyone in Serbia should pay attention to this report, because the accession reforms are being implemented, primarily, in order to improve the lives of citizens.

Although Serbia has not opened a single chapter this year, Fabrizi insists the process continues.

"The new government in Serbia will have a unique opportunity to give a decisive impetus to the EU's reform agenda, especially key reforms in the rule of law." That opportunity should be used in full, decisively and without hesitation", Fabrizi said.

He disagrees with the approach that Serbia needs a solution to the Kosovo issue to join the EU, but that such demands are not uncommon.

"It is a partial and deliberate interpretation that seeks to see the whole accession process only through the process of normalization of relations with Pristina, while wrongly diminishing the role of the rest of the reforms," said the European Union ambassador to Serbia.

Fabrizi said that most of the work for Serbia is in the area of the rule of law, which is crucial for the content, and that, politically, EU accession should be kept beyond domestic debates.