"I said 'no' at the toughest place in the world"

President Aleksandar Vučić says that Serbia had no support in the US for the last 30 years, the doors of the White House being closed to Serbs until this moment 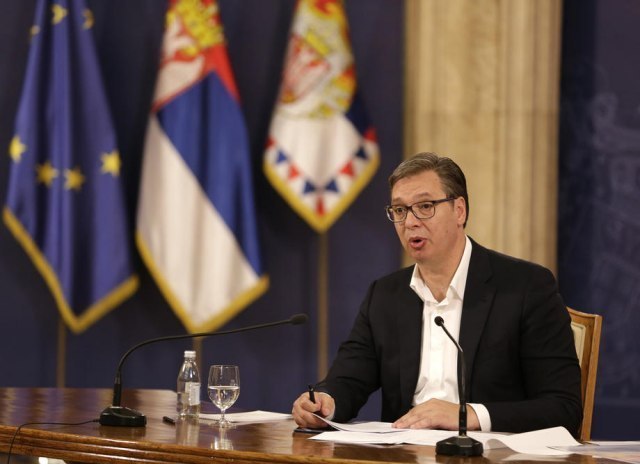 "Respect has been shown towards Serbia," he said being hosted on RTS.

He said that he brought the originals of the agreement that he signed in Washington, so that people could see what is true.

Vučić stated that the Serbian secret services knew that there would be points "difficult for Serbia" that would be presented in the White House.

"The Americans and the Germans created Kosovo, not the Swiss, of course," he said.

He added that we had a geopolitical division to the west and east for a year and a half, where Serbia was on the path to the EU.

"When you had those two poles, we could maintain our position in a relatively comfortable way. We always sat on the Serbian chair. Now the situation is more complicated, now you have four chairs: the European Union, Germany, China, Russia and you have a large number of regional players", he said.

Vučić said that Serbia has never had support in the last 30 years in the United States and that the doors of the White House have been closed to Serbs until this moment.

As he stated, the strength of America is known and what they did for Pristina.

"I saw how they are not allowed to say a word, because the strength of America is known and what they did for them. It is enough to say that they are withdrawing their forces from Kosovo and they will fulfill everything immediately. They will not play with that," Vucic said.

"Now I can officially say that I said what I said regarding recognizing Kosovo at the most difficult place in the world. In the room where I was sitting, there were Pence, Kushner, Johnson, Grenell, O'Brien, a hundred times more powerful people than me. This was a problem for them. I'm not interested in form and chairs", Vucic said.

As he said, he could be sitting on the floor, he could stand, he would do it with pride.

"I would do it with pride, because I know what I'm doing, I'm guarding the interests of my country, which I'm ready to fight for. There was a hard fight in Washington, we didn't sleep at night, we had a ready answer to everything. Those were tons of paper we carried", he said, adding that good work had been done for the country.

"We succeeded in that," Vucic concluded.

Serbia's relations with China and Russia are very good

Vučić said that he had frequent consultations with Russian President Vladimir Putin.

"You could see how much the Russian state respects Serbia and me personally," he said.

He added that Putin and Lavrov did not apologize for anything, but that they did because of Maria Zakharova's moves.

"He showed decency with that. I thanked him for all the support he gives me," Vucic said.

He said that the talks with Putin and Lavrov were good and comprehensive.

"Putin understands the problems of Serbia very well. Do you think that he accidentally gave me the Order of Alexander Nevsky? I am neither a Russian, nor an American or a German, but only a Serbian who works for Serbia. He knows well how I work," he said. Putin always contacted him within 24 hours.

He added that Serbia's relations with China and Russia are very good.

As he said, reliability and respect in the international community is gained by respecting and implementing what you sign.

It is a notorious lie that Serbia supported the recognition of Kosovo by Israel, as some have said, said President Aleksandar Vučić tonight.

By the end of the month, he says, we will open an office of the Chamber of Commerce in Jerusalem, which many countries from the Czech Republic, Hungary and many other European countries have, and that will be a great incentive for Israeli, American and many other Jewish investors to come to our country.

It is a notorious lie that Serbia supported the recognition of Kosovo by Israel, says the president and adds that that is why we have a different agreement from what the Albanians signed:

"Because I did not accept that. I did not want to accept," Vucic said.

"It is very important to them, Israel is America's biggest ally, America probably influenced those relations between Israel and Pristina in different ways, but I did not want us to accept that in that way," he said.

"When we should have agreed to recognize Israel and Pristina, I said - 'it is out of the question for Serbia to agree with that.' Who am I to allow anyone to recognize Kosovo? That cannot be. in the agreement ", the President conveyed the position he took during the talks in Washington.

He says that he will say the same to Prime Minister Netanyahu tomorrow: "You are a sovereign state, you are much stronger than us, Serbia has shown you great friendship. Israel is a hundred times more powerful than us. This is our hand extended towards you. If you think we will be happy if they recognize it, we won't ".

We will talk, he says, with the Palestinians and our Arab friends, on that issue.

When asked whether Serbia will be the third country to move the embassy, he said we will see.

"We will see if Israel recognizes Kosovo, and we will see from their point of view. We will see how Palestine and other Arab countries will recognize Kosovo," the president said.

On that occasion, he also talked with some world representatives:

He saw, he states, that they were shocked...

The essence is that there are many who would like to lead the foreign policy of Serbia, the president believes.

"However, Serbia is no longer as insignificant as it used to be. Today, Serbia is richer, militarily stronger, and that is why there will be many who think they can preach to us how to behave. Serbia is not a handful of oats", President Vučić concluded.

A year without new recognitions of independence

The President of Serbia, Aleksandar Vučić, stated tonight that the moratorium mentioned in the agreement from Washington means that Pristina cannot ask for new recognitions, which was clearly and precisely confirmed by the American representatives.

In an interview with RTS, Vučić said that Serbia asked for it to be written in the agreement, with the exception of Israel, and added that Priština cannot receive recognition from any country.

"Every year, they were denied admission to the UN, Interpol, international organizations, and we always turned out to be bad guys who prevent them from doing so, but we spent a lot of time and energy on it. This means that they can dream of getting their independence for a year", said Vučić and added that the question is whether they will ever get it.

About the meetings in Brussels

Vučić said that he was able to say "no" in the most difficult places.

"Not because I like to say no, I would like us to reach something that can be a compromise," he said, adding that he did not want us to leave the Kosovo problem to our children.

He added that the idea of Pristina is that they are ready to fulfill their obligation pertaining to the Union of Serbian Municipalities.

"Their idea is not to do anything at any time where they would show the slightest good will towards Serbs, let alone do something," he said.

He added that it is important for the EU to understand that it is necessary to achieve a compromise, and not to achieve the goals of the EU or any specific country.

"These people must understand that what we are asking for is a minimum of respect where Serbia will not be humiliated and they depicted as great winners. Because peace and stability are what we are interested in. We hope that the EU will have the strength to understand that," Vucic said.

"In such circumstances, people must understand that we are looking for a minimum of respect, compromise, that both sides must be equally dissatisfied. We are looking for a compromise, because peace suits us best, and we are interested in stability and security because of the economy. "They understand well what we are talking about. If they don't find it, we already have the Brussels Agreement behind us with the failed drafting of the Unison of Serbian Municipalities, so it wouldn't be the first time," he said.

Vučić pointed out that, based on everything that has been done, the smallest number of Serbs have left Kosovo and Metohija in the past eight years, compared to the past several decades.

Vučić said that the new government will be led by someone capable and energetic, and that the composition will be known by the end of September.

"I believe there will be significant changes in every sense, not because the previous government did anything wrong."

When asked who will be the prime minister, he said that there are more candidates and that the government will have more difficult tasks ahead of it.

"That government must be a government of brave people," he concluded.