Grenell: We have put the question of borders aside

Special adviser to the US President, Richard Grenell, says that the goal of the Belgrade-Pristina agreement is to leave the borders aside as much as possible. 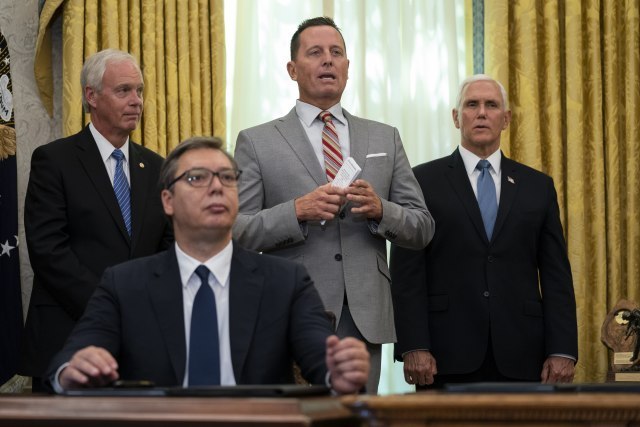 Grenell estimated that the agreement with the insistence on the economy will have repercussions on the international level as well.

He stated this for "ACLJ.org", a program whose hosts and authors are lawyers Jay and Jordan Seculow, and he posted a link to the show on his Twitter account.

He reminded that the agreement also included the recognition of diplomas, the opening of the Belgrade-Pristina airline and the development of railway and road traffic, which will contribute to the strengthening of trade exchange.

He also reminded of the lake (Gazivode) of the feasibility study being done by the USA on how to use energy potentials.

"There are two or three aspects of the agreement - the first is Hezbollah marked as a terrorist organization, the second both sides have agreed to diversify energy supplies and deepen relations with Israel," he said.

For Serbia, where 100 percent of the energy comes from Russia, that means turning to other sources of supply, both sides have agreed to diversify the source of supply, Grenel said.

According to the special adviser to US President Donald Trump, the agreement will deepen ties with Israel, Serbia will move the embassy to Jerusalem by July, Kosovo and Israel will recognize each other, which will strengthen their mutual relations.

"It all moves the region to the west and turns away from Russia and China. It is a great diplomatic victory for Donald Trump," Grenell believes.

When asked to comment on the fact that Bosnia-Herzegovina is also considering moving the embassy to Jerusalem (this is a proposal by the Serbian member of the BiH presidency Milorad Dodik) and whether it is a matter of moving away from Russia and China, Grenell said that all that makes the US safer.

All this makes the United States have more allies and opens the possibility for American companies to expand their business in the region, he stated.

Jay Sekulow, a radio and TV presenter, is, among other things, Trump's private lawyer, and he represented him in the trial before the Senate in January. His son Jordan is also a lawyer, political advisor, and former Washington Post blogger.