The media advisor to the President of Serbia, Suzana Vasiljevic, told TV Prva that our secret services knew that Pristina would put point 10 on paper. 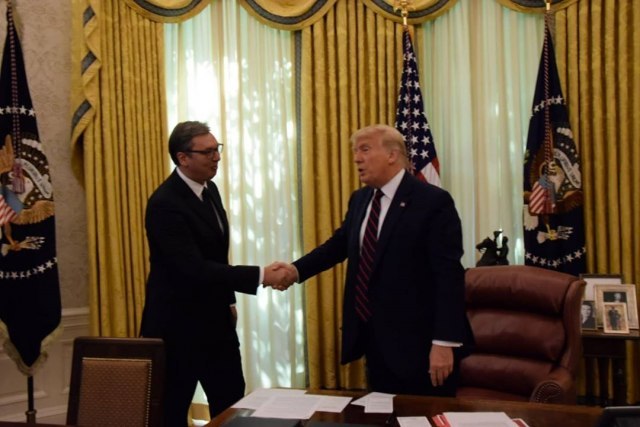 She reminded that Pristina delegation said before leaving for Washington that they would ask for the recognition of Kosovo. "Our security services have received a warning that this point will be on paper", she said.

The President of Serbia, Aleksandar Vučić, then warned some of the EU leaders by phone and tried to explain to them that the point would be on paper. According to Vasiljevic, they claimed that it would not exist and that it would only be about the economy.

The special envoy of the President of the USA, Richard Grenell, himself hinted that a surprise could be prepared for the Serbian delegation.

"In the end, you saw that there was a point," said President Vučić\'s adviser, explaining what was happening behind the scenes of the cameras during the Serbian delegation\'s stay in Washington, where the agreement was signed with Priština, in the presence of the US President.

"The moment he saw that point on paper, there was no more conversation for Aleksandar Vučić. I have been working with him for eight years and when there is a problem, he is almost pathologically focused on it. He did not even speak at dinner," Vasiljević said.

The pressures on the Serbian delegation were terrible, because the future of the country depends on one of your words, "YES" or "NO", Vučić\'s advisor pointed out. However, the President of Serbia said that Serbia cannot continue the conversation in Washington unless that point is dropped.

She reiterated that the Minister of Finance, Siniša Mali, who was part of the delegation in Washington, told the media that there was a point on mutual recognition on the table and that our delegation was under great pressure.

PKS President Marko Čadež, she says, praised the economic part, which, from the beginning, was good for Serbia.

She points out that President Vučić rejected that point and that after that there was a break of almost two hours, and when the negotiations were settled, that point was no more present on paper.

"That point has been dropped," Vasiljevic said.

And then, she says, problems arose for the Pristina delegation because they were left without a point because of which they came to Washington, followed by the issue of Lake Gazivoda and the name "Republic of Kosovo".

According to her, there is not a single thing from the signed agreement that is harmful for Serbia, and the very name of the agreement has been changed because it is written on paper that the agreement was not signed by Serbia and the so-called Kosovo but between Belgrade and Pristina instead.

In addition, the American side admitted that injustice was done to Serbia, which, as Suzana Vasiljevic claims, is a precedent in itself for the United States.

Asked how she commented on the fact that Albin Kurti announced on Twitter after the Vetëvendosje (Self-Determination) press conference that the obligations assumed by the Prime Minister of the Provisional Institutions of Pristina, Avdulah Hoti, in Washington by signing agreements, "do not oblige" Self-Determination "when they return to the cabinet", Vasiljevic said that it is a statement of intent signed in the presence of the President of the United States, which is a binding document.

She says that the American administration strictly adheres to the fact that whoever is in power should respect the agreements signed by the previous authorities.

"There will be great pressure from the international community on us and on Pristina. All this shows how difficult Serbia's position is."

Asked how she sees Ivica Dacic's comment, to which Grenell also responded, and whether it was "laughter or mocking laughter" in Grenell's tweet, she said that Grenell's comment was more about the seriousness of what was agreed in Washington, since she knows that the Serbian side will fulfill everything it has done.

She adds that some former ministers minimize Serbia's success in Washington by measuring it by the size of the chair.

She emphasized that the President of Serbia had a tete-a-tete with the US President for the first time in many years, and that Donald Trump dedicated 15 minutes to listen to him before the elections and the fight with COVID-19, as the president of a small country from the Balkans.

She also commented on Dragan Sutanovac's tweet, which shows that Trump is sitting in exactly the same way with the most important people from his team for fighting coronavirus, whose members are sitting across from him in chairs the same as President Vučić, stating that the setting is always the same, just changing the number of chairs.

She pointed out that such a protocol is the same for the representatives of all other countries, considering that measures are being applied to prevent the spread of COVID epidemic.