Vučić: I am proud

President of Serbia, Aleksandar Vučić, stated today that he is proud of the Agreement signed in the White House. 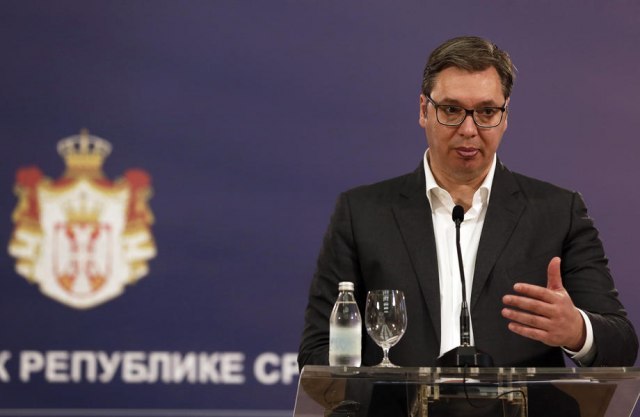 He added that he was proud of the fact that Serbia managed to fight not to recognize an independent Kosovo.

"The last thing we heard when the meeting in Washington was announced was - ''you will recognize an independent Kosovo''. When they saw that we didn't, then they started talking about other things, and suddenly they were bothered by highways, mini Schengen, etc.", Vučić said from Brussels, on the occasion of the comments on the actions of the opposition in the country.

Vučić said that, of course, he knew what was written in the agreement and explained that, as noted in the video, he turned around when Donald Trump mentioned July, and he, Vučić, knows that this year is September, which is, by the way, the deadline for opening a PKS office in Israel, and the relocation of the embassy is planned for next year.

"It is clear to everyone when they look at the document. He meant July next year, and he did not emphasize that it is next year, and that is the only reason why I turned around," Vucic said.

He reiterated that he usually "checked" three times what was in the documents to make sure that Hoti's folder did not come to us.

He also spoke about the calls of the part of Serbian public for his resignation.

"Should I resign because I did the most for Serbia, because I arranged for the reception of Serbian representatives in the Oval Office, to sign a paper containing nothing humiliating for Serbia? I am proud of that," he emphasized in the conversation about the opposition's reactions to that agreement.

Vučić pointed out that the Serbian delegation did the hardest possible job under the most difficult possible conditions.

"But I understand them and everyone has the right to ask. They will win the elections in a year and a half, so they will win, as they always do", he pointed out.