It's done: The economic agreement between Belgrade and Pristina signed

Trump's assistant said that the agreement on economic normalization between Serbia and so-called Kosovo was reached. 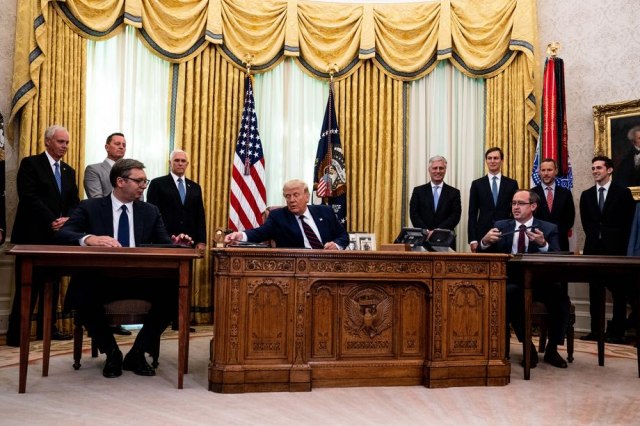 As TV Prva reports, the agreement doesn't have any disputed points on mutual recognition of independence, but there was a point regarding Gazivoda, which bothered Albanians. The agreement also states that, at the suggestion of the President of Serbia, Kosovo will join the customs union, the so-called Little Schengen.

After signing the agreement in the Oval Room, Donald Trump will hold a meeting with Vučić and Hoti.

The President of Serbia, Aleksandar Vučić, arrived to the White House around 5 PM, while the delegation of Pristina arrived at 5:38.

The President of Serbia said that after the meeting with Donald Trump at the White House, an excellent meeting was held, reports TV Prva.

Vučić stated that there still are some huge differences between Belgrade and Pristina, but the agreement on normalizing economic relations, which was signed today in the Oval Room of the White House, is a big step forward, Reuters reports.

The video of signing the agreement was published on the official Twitter account of the White House.

Trump's meeting with Vučić and Hoti was scheduled for 5 PM today, but in the meantime, media in Pristina announced that Hoti was running late after the warning from Pristina, that the Government would fall if he signed the agreement.

Despite the disputes in the ruling coalition and the opposition of ABK leader Ramush Haradinaj to signing the agreement with Belgrade, Pristina's delegation also includes ministers from that party.