Vučić: Serbia is not in a position to refuse talks, Albanians provoke on the ground

Serbia is not in a position to reject talks, Aleksandar Vučić says on the occasion of Grenell's announcement that the meeting will be held on September 2 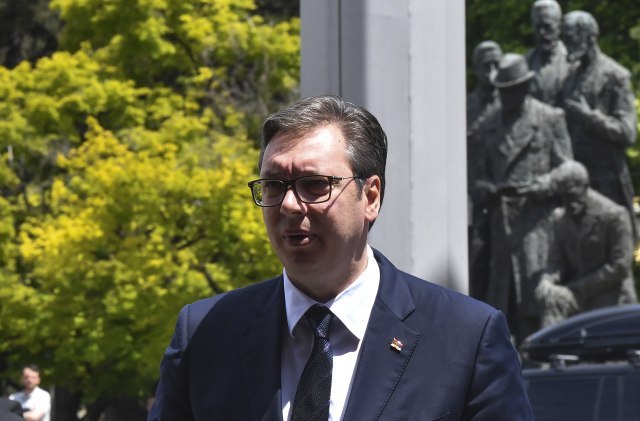 "Serbia is not in a position, but it would not be good if it was in a position to reject the talks. Why Grenell used the term 'negotiations' is a question for him. We participate in the talks, the topics are economic, it is important for us and they are good topics ", Vučić says.

"The other day, they said that they support the negotiations under the auspices of the EU. But, I should not enter into their relations. We are too small to be able to afford that," Vucic said.

From the point of view of the Americans, two independent states are participating in the negotiations, Vučić says, and that is how Brussels views us.

"Germany is so superior in the EU," he added.

Albanians come to the negotiations for several reasons, Vucic says.

Vučić warns of the possibility of Kosovo Albanians provoking on the ground, such as today's incursion into the property of the Decani monastery.

He pointed out that Pristina's goal is not the freedom of flow of capital, goods and services, but only to reach a final solution without negotiations, and that is the recognition of independence.

Vučić said that he had no doubt that there would be more provocation on their part on the ground.

He reminded that they invaded the protected zone of the Decani monastery again.

"They came there with machines to build the highway, despite the verdict of their own courts. What do they care about the monastery and the verdicts. These are things that bring extra restlessness and anxiety. We will fight against that in every place," he underlined.

Serbia wants to achieve peace by arming itself, he says.

Asked how he commented on the fact that the Albanians also procured drones like the ones in the USA, Vučić said as a guest on TV Pink that they are not exactly similar to the ones we procured because their's are reconnaissance and our combat - reconnaissance, and that Albania only ordered those aircraft that will not arrive until the end of 2022.

"And what are we going to provide by the end of 2022 ... People don't need to worry. But we are not arming ourselves to attack at any time and to be at war with anyone, but to preserve the peace and stability and tranquility of our people", Vučić stated.

Vučić points out that Serbia is not preparing to attack someone, but to prevent aggression against our country, because it will be much harder for someone to assault Serbia if we are well armed.

He adds that in 1999, it was much easier to make the decision to attack Serbia, because the economy was destroyed and we had outdated weapons, which still managed to shoot down their planes.

"Today, Serbia is much more seriously armed and will be, it is the result of accelerated economic growth and the smart policy we have chosen," Vucic emphasized.

He also says that the Kosovo side has high recruiting power, that it has one whole generation more than us - because they are much younger, and those are our problems.

"That's why demographics remain one of the key problems. We have the most children in poor areas," he explains.

As he further states, the economy is a key topic, and the conversation on that topic is in the interest of both sides.

"Easier trade, easier flow of people, what we talked about - railway lines," he states.

Regarding the attack on him, Vučić says that it is normal.

"I am guilty for introducing and then for lifting the measures, when you say that there is no vaccine, when you say you will get the first one, I'm guilty for that as well. When we say it will be from China, they don't want it to be from China, and then from Russia, we will not have vaccine from Russia... When Red Star and Partizan play, if Red Star wins - Vučić set it up. Everyone laughs here in the studio because they know it's true".

Speaking about Marinika Tepic's statements regarding Telecom, President Vucic said that the company was a joint stock company in which the state of Serbia has a majority share.

Vučić said that Serbia is the second partner in Bosnia-Herzegovina with Telecom and the first in Montenegro.

"Then, politicians attack Telecom... I have no gain from Telecom, nor do I have anything to do with that company, but the president of the party Marinika Tepic belongs to, took 30 million euros from Telecom," Vucic said, referring to SAA president Dragan Djilas.

Vučić said that today, since Telekom bothers them because it is getting stronger, not weaker, they are telling lies.

"To work for tycoons against your country - these are incredible things that show irresponsibility and such frivolity that I am shocked by that," Vucic said.

He adds that (some from the opposition) after the "idiot ideas" about the boycott of the elections, switched to the idea of ​​a boycott of Telecom.

President Vucic did not want to comment on the events in the opposition.

"You said at the beginning that attacks were coming from the east and the west. When you lead a country that is independent, you will always be under pressure from the big ones. They are under pressure from bigger powers than us, not one small Serbia," he said commenting their attacks on him and their alleged support to the opposition.

As he states, he thinks that it is logical that others do not rejoice because of our good economic successes.

"They would like Serbia to be as weak and unsuccessful as it was in 2010. To have an insufficiently strong army, to run from one place to another to apologize and not to mention our victims," he says.

"The police came only when the bandits broke into the Assembly. Only then did the police appear and establish public order and peace," he says.

He also explains that the protesters targeted the police, but also that everyone from the police who used excessive force will be held accountable.

"The one who shoots policeman, shoots him because he knows that he must restrain himself. The brave and honorable do not do that," he says.