Aleksandar Vučić stated that the government of Mirko Cvetković, during Boris Tadić's presidency, reached decision concerning the export of weapons to Armenia. 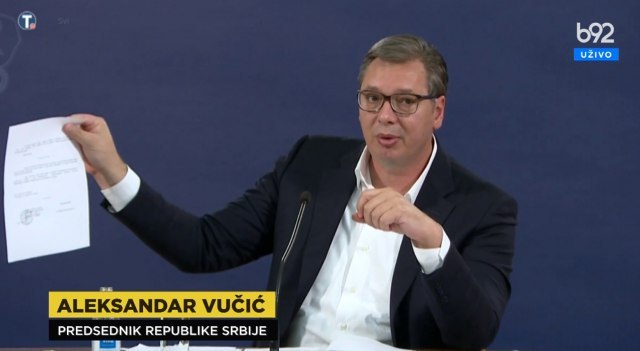 "A lie has no legs", Vucic said at a press conference regarding Tadic's accusations that he was exporting weapons to Armenia and thus spoiling relations with Azerbaijan.

He showed journalists the document, the conclusion of the Government of Serbia from May 24, 2012.

"That was done by the government of Tadic, who attacked me for that," Vucic pointed out.

He added that he talked today with the President of Azerbaijan, with whom it was agreed to visit Serbia.

He says that the action plan was signed with Azerbaijan, and that we have friendly relations with Armenia as well.

He points out that he never spoke about the moves of some previous governments, rejecting the claims that we are ruining relations with Azerbaijan.

Evidence for that are the infrastructural works and the construction of roads that that country is carrying out in Serbia, noting that Serbia paid 91 percent of the road Ljig - Cacak and did not say that it could have been better.

He ironically remarks that he is always to blame for everything, even for the power outage in Divčibare, so why wouldn't he be the one to blame for Cvetković's documents as well.

"There is no problem with that. I intentionally repeat all these insults, and they don't mean anything to me. Hospitals, railways, roads, those are important to me, so that we have zero growth rate, and not minus 10 like many other lands," Vucic points out.

He emphasizes that he is a veteran in politics and that they cannot jeopardize him with meaningless stories.

The results that are visible are important, and the coronavirus epidemic prevented the best times of Serbia, he added and also rejected the claims that by buying weapons, Serbia is buying the favor of some countries.

"Serbia is buying the weapons it needs, not out of affection," Vucic said, telling those who would like something bad to happen to Serbia, that the people know how to choose well and they realize who takes care of their interests.

He pointed out at the press conference that in Serbia, if COVID-19 pandemic had not happened, the expected growth would have been 6%.

"Some would like something bad to happen, like in Beirut, for someone's political pupppet to come to power, but the people know how to choose," he said.

He also specified that the new aid package amounts to 18.4 billion dinars, and that the total amount to support the economy reaches almost 6 billion euros.