Vucic: We aren't negotiating here only with Pristina; Two principles have been agreed

President of Serbia, Aleksandar Vucic, said that he had meetings in Brussels with Pristina about missing persons, internally displaced persons, and the economy. 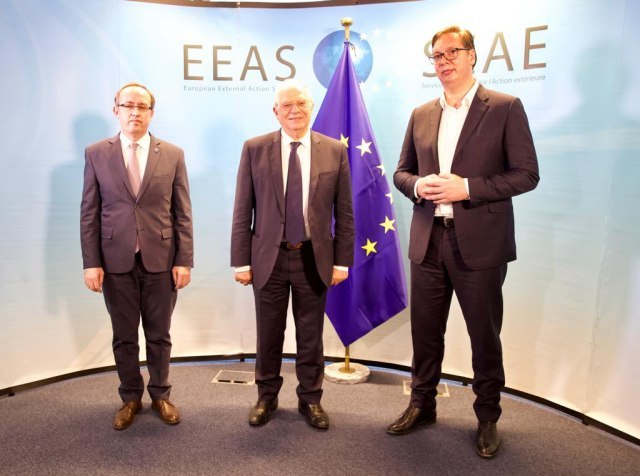 As he stated, there are 1.643 or 1.644 missing persons in Kosovo and Metohija, depending on the records kept by the two sides, of which 570 are Serbs and non-Albanians, and the rest are Albanians.

"We were ready to accept any form of conversation," he told reporters in Brussels.

"We said that Serbia will never protect anyone, that we want it to be important to find the places where those people were buried because of their families and those who lost their loved ones. We said that we are ready to respond to every request of Albanians, that we are ready to work with them, with EU's presence to show whether there is something in that place or not, but we asked for the same right for us”, he said.

“Serbia is prepared to meet every demand from the Albanian side and we are ready to show whether there is anything in places which they think are mass grave sites but we are demanding the same for us,” he said, adding that 570 of the 1.643 persons missing in Kosovo are Serbs and non-Albanians.

Vucic said that he asked for that right because we did not have access to Lapusnik, Donjice, Djakovica, Kosare, Istok and some other locations, and that talks on the issue of missing persons would continue on Wednesday.

"Albanians demanded that all military and police archives be opened. We said there were no problems with the issue of missing persons and internally displaced persons, but Serbia demanded that the so-called KLA archives be opened so that we could see where Serbs and other non-Albanians were killed. As soon as we mentioned that, the Albanian side strongly protested," he said.

Vucic said that two principles had been agreed upon: it was agreed that we would work with the Red Cross and accept their rules, and the other was that we would be open and express our political will to find the missing persons.

"Kosovo and Metohija is the place in the world where people rarely return to. There has never been a war conflict where only 1.9 percent of the displaced persons returned to their homes in Kosovo," he said, but expressed hope that appropriate solutions would be found.

Vucic said that issues on the economy were also discussed, but that some came to talk about war reparations.

"One of the issues was war reparations. I refused, I said there was no point in talking about it," Vucic said.

As he said, he proposed a trade agreement which, he added, “would not demean us and with which we would not show that we recognize Kosovo as a state because we aren’t”.

However, Vucic said that they discussed speeding up the works on the Nis-Pristina highway with greater European participation.

"It will be difficult, you all know for what reasons, because we are not negotiating here only with Pristina, but also with Brussels and with the most powerful countries of the European Union that have all recognized an independent Kosovo. I think we are well prepared for the meeting," he concluded. .

He added that he would be in Brussels again in fifteen days, and that other issues would be on the table in September, such as property, and that he asked for the Union of Serbian Municipalities to be discussed.

"I am glad that we really came to talk, to make progress, and now let the Europeans assess how and in what way the other side approached it," he concluded.

We really fought in an honest, open, serious and responsible way for the interests of Serbia, President Aleksandar Vucic said tonight, after the continuation of the dialogue in Brussels.

When asked what he said to the Pristina side at the meeting, Vucic said that he did not like to do that, because then it is not a dialogue, but a retelling for the media, so, he says, next time everyone will think only about what they will say at the meeting.

"It's not always easy for us, but whoever asks us... It's our job to fight for Serbia. You cannot imagine what I've been listening to during the past eight years, a dog wouldn't swallow that with butter," Vucic added for TV Pink.

"We expect a lot from the EU"

Serbian President Aleksandar Vucic said tonight that he had talked with European Commissioner for Neighborhood and Enlargement Oliver Varhelyi about significantly higher amounts from IPA funds, as well as about the significant influence of Serbia and the region in the investment cycle, which he said would be decided in September.

"We expect a lot from the European Union," Vucic told Pink TV and thanked Varhelyi for being a sincere friend of Serbia.

"He does everything in his power to help our country. You know I don't say that often, but he is a great friend of Serbia, whether because he is Hungarian or for other reasons... I think he is an exceptional man," Vucic said.

The President said that he would have two more dinners in Brussels tonight, with the two prime ministers, so he would return to Belgrade in the morning, where, he says, he expects to continue consultations on the formation of the Government of Serbia.

"Their strategy is to isolate the country"

All those who say that the dialogue between Belgrade and Pristina is meaningless, should then go before the citizens and say that their strategy is to close the country, because without dialogue, Serbia has nothing to talk about with France or Germany, President Aleksandar Vucic noted tonight.

Asked on TV Pink whether the Belgrade-Pristina meeting and dialogue makes sense, given that some opposition leaders say it is meaningless, he replied in an ironic tone:

"Everything is meaningless. It is best to close the country, to never do anything, to overthrow the assembly, and to come to power without elections. That would be ideal."

The President pointed out that Serbia has nothing to talk about with France or Germany, if it does not have a dialogue with Pristina.

"If they don't want that, then only let them tell the citizens that they would close the country, in which no one would invest anymore," Vucic added.

As he says, he is not interested in marginal political parties and meaningless attitudes.

"My job is to work in the interest of the citizens, to fight for the people in Serbia, and not to say how we repeated some slogans here, so that someone would be happy... I will not flatter anyone," Vucic concluded.