Vucic from Paris re: the Belgrade events: Thugs will be defeated, the masks fell off

The President of Serbia, Aleksandar Vucic, speaks live from Paris about the current events in Belgrade 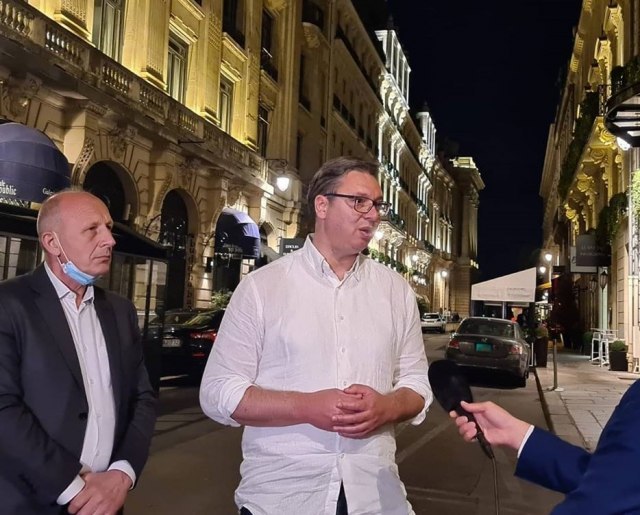 Demonstrations were held in Belgrade tonight, despite appeals not to risk further growth in the number of coronavirus infections, as well as epidemiological measures, including a ban on gathering of more than 10 people in the open, and during the evening, protests became violent again.

On pulling of knives in front of the Assembly and to what extent it will be tolerated, Vucic said:

"We had an important dinner tonight and we are returning to Belgrade tomorrow morning, not to worry too much, not because the bullies did us no harm, but also regarding the final outcome. The bullies will be defeated, a good part of them arrested, they will have to answer for all their criminal acts. I think yesterday and today all the masks fell off. It work for a day or two, the third day, it doesn't work. "

There are an incredible number of bullies and tycoons in Serbian politics, as well as their sons, Vucic said, talking about the arrest of the son of former minister and advisor of Ivica Dacic during the attempt to break into the Assembly.

He mentioned that he did not think that it must have anything to do with Dacic, on the contrary.

"You have seen some former MPs who insist on violence because they no longer receive a salary in the National Assembly. But, no, you will not come to power by violence."

"People, our doctors and nurses can't take it anymore, we don't have any more hospitals. I have to say a huge thank you to the cops who suffer that, the torches on themselves, the people who stab themselves with knives."

He said that this is about tycoons and their children who are healing their frustrations, because they cannot go to vacation.

"The essence is that the state will win over that tycoon's policy. People should not worry about the final outcome. I have never received so many messages, I get thousands of messages. They say let's finish with them. No, we have to defend democracy," Vucic pointed out. .

He commented on the fact that the government sent hooligans to attack the opposition: "No, they attack us and the police. When did you see that someone attacked someone at our rallies? We come to our rallies peacefully, we don't go to other people's rallies, we talk about our policy and the program. Today, the state saved them from each other. "

"Don't engage in terrorism, violence and do not infect people."

He pointed out that all protests were illegal, the state did not give permission for any of them.

"Hooligans and tycoon children gathered and held a protest," Vucic said, adding that, of course, there are innocent people who happened to be there.

"The red line is endangering institutions and people's lives. Tonight, we let them come within a meter to the Assembly, they broke windows, the people will pay for it all."

He said he has no information regarding 50 people from Montenegro who were reported by the media as planning to come to Serbia and cause riots.